It is not unusual to see foxes in the Ontario neighborhoods 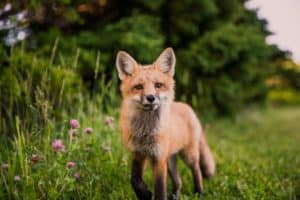 . There are many foxes in Canada, and they surround the native wildlife with wild dogs, wolves, bears, and other wild animals. There are many species, they are small dog-like animals, with a sharp-pointed face and ears, a mobile and lightly built body, in addition, they are the most common mammals in the wild.

In the Ontario region, the Red Fox and the Grey Fox are the most common. Red Foxes are found wild in Southern Ontario and trough all provinces and territories of Canada. Red Fox is their common name, although not all of them are actually red. The most common color is deep red, often brown and almost black. Grey Foxes are the size of a small dog or a large cat and look very similar to the Red Foxes. Unlikely them, Grey Foxes have a grey coat and a black tail tip.

Foxes live simply everywhere: in rural areas, in the countryside, in towns and city parks, in forests, mountains, and meadows. Their habitat has been largely destroyed, and they are forced into closer contact with humans to find food, shelter, and space. Today, they usually live close to homes and communities where they can find shelter, but usually also plenty of food and sustenance. Most residents of areas in Ontario nicknamed them “urban foxes” because of their habit of living in urban areas such as parks, yards, and golf courses.

Naturally shy, secretive, and nervous, foxes prey on chickens, rabbits, squirrels, hamsters, and even small cats, or dogs when they are easily accessible, but most residents of the country and rural areas are aware of the benefits foxes offer. In fact, foxes tend to eat large numbers of rodents and insects, which is further damaging to the corps, for reasons that farmers and wildlife enthusiasts tend to keep them close.

Are you curious to learn more about the argument? Will you read on? We will explain on what occasions it is legal to keep wild foxes as pets, what the Ontario regulation says and why foxes cannot be companionship animals.

Canadian regulations on the possession of foxes and other wild animals

First, it is unethical to keep a wild animal as a pet. It is even more morally questionable where there are many homeless pets in Canada, such as dogs, cats, rabbits, and hamsters. Second, there are a number of local, provincial, and federal regulations in the country that govern the ownership of wild animals as pets. In poor worlds, it is illegal to own foxes in Canada. Many Canadian provinces regard fox species as native wildlife and prohibit their ownership for personal interest. In addition, the Grey Foxes are a protected species that is prohibited nation wild as a pet in Canada. Moreover, importing a fox into Canada from other countries for the sole purpose of keeping it as a pet is illegal.

In Ontario, it is rarely legal to import only non-native species that are not threatened with extinction. In addition, some licensed wildlife keepers may keep foxes in rare cases. Exceptions are included in the provisions of the Fish Wildlife and the Conservation Act and are mainly related to the care or rehabilitation of sick, injured, or orphaned foxes. They include:

Why you shouldn’t own a fox?

It is also true that few species are as adaptable as the foxes in Ontario. They roam gardens and yards in urban areas and play a vital role in the ecosystem. It’s unusual for these wild animals to approach humans, but it’s not uncommon for them to approach them, especially when humans feed them and give them pet food and trash scraps from the garbage.

Foxes are adaptable and opportunistic. The most important way to avoid conflict is to take proactive steps to return them to the wild, rather than tying them to your home. Under normal circumstances, foxes are not a treat for humans or pets. Even if they have food, they are unlikely to come into contact with humans, but they may occasionally get too close to humans to find shelter or food. If you encounter a fox that has not run away, make noise. Clap your hands, wave your arms, or scream, but do not chase or approach them. On these occasions, wild foxes can transmit zoonotic parasites and infectious diseases such as rabies, giardiasis, leptospirosis, and other diseases that pose a threat to humans and other animals. Saliva, urine, feces, bites, and scratches are the most common routes of exposure. Wild foxes can screen viruses, bacteria, and parasites that can cause infections and diseases in both humans and pets.

Even wild animals like Red Foxes or Gray Foxes can get sick. There are not many vets in Ontario who deal with wild animals, so it can be impossible to find appropriate treatment. When you visit a veterinarian, you must prove that you are a licensed wildlife owner and that you have not illegally imported animals or taken a fox from the wild.

Sometimes wild foxes can pray on free-roaming pets in gardens and backyards. They will pray on cats, small dogs, hamsters, birds, and rabbits. For their safety, they shouldn’t be kept outdoors or unsupervised. Small dogs and cats can be walked on leaches too. In addition, here are some guidelines on what to do if foxes live on your propriety:

There are many species of wild foxes in Canada. In Ontario, you can spot Red Foxes and Grey Foxes. They live everywhere: in rural areas, in towns, in city parks, in forests, mountains, and meadows. Their habitat has been largely destroyed, and they are forced into closer contact with humans to find food, shelter, and space. Canadian regulation prohibits own a wild fox, so it is illegal to own a fox in Ontario too, furthermore, it is unethical. In addition, wild foxes can transmit zoonotic parasites and infectious diseases for humans and other animals. They can pray on free-roaming pets in backyards too. Generally, they are unlikely to contact humans, for prevention Ontario citizens must take some general steps like never leave food or garbage outside. When you find a wild fox in your driveway or backyard, make noise, clap, and wave your hands to make it return to nature.