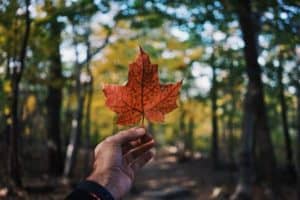 There are 1,042,300 km (647,700 miles) of road in Canada, but most of these are around the more heavily populated areas of the country. In the far north, roads become scarcer and harder to maintain. The most northern drivable points are mostly within the tundra region, in sparsely populated areas. Filling stations and villages are distant from each other.

The Arctic Circle is at 60° North latitude and the northernmost inhabited point in Canada is in Cape Columbia, Ellesmere Island at 80.8° North which is only 769km (477.8 miles) south of the North Pole. With modern advantages, roads, whether gravel, paved, or ice can go farther than ever before, but not quite to the Pole. Permafrost and tundra landscapes are delicate and unstable, making them difficult to engineer. In areas without villages or industry, there is little reason to build roads.

Quebec claims the longest stretch of northern road, the Trans-Taiga road although it doesn’t reach the farthest north point. The Northwest Territory has the northernmost four-season road that terminates at Canada’s third coast, the Arctic Ocean. The Inuvik-Tuktoyaktuk highway was only recently completed and is an amazing feat of engineering. There are many ice roads in the winter, but Nunavut Territory has one of the most heavily traveled northern ice roads, the Tibbitt to Contwoyto Winter Road.

These northern regions have low and thinly spread population densities. The Northwest Territory only has 44,000 people and Nunavut has less than 40,000. The local populations rely on All Terrain Vehicles In the summer and snowmobiles in the winter, as well as ferries and planes. The few roads are generally gravel and are not well-traveled.

The far North has a unique set of challenges to road building. The ground itself is permafrost, which means that there is a high concentration of water which is permanently frozen underneath the top layer of soil. The top layer is mushy mud in the summer, and basically impassable without a 4×4. Traditional pavement does not survive in the extreme temperatures– as low as -40° ( -40℉ ) in winter. Gravel is easier to maintain, and therefore it is the preferred choice for the northernmost stretches of highway.
The Inuvik-Tuktoyaktuk highway was built partially in winter, in nearly 24 hours of darkness, extremely low temperatures, and high winds. The land is 90% water and unstable, so it was built with 2m (6.5ft) deep gravel. It took over 400 people working in shifts around the clock over four years to build. The extreme environment made road building a challenge, and it stands as a testament to modern infrastructure.

In many areas near the Arctic circle, the water in rivers and lakes freezes to a depth of at least 40cm (16in) but usually much thicker which is dense enough for driving. Many small communities have unofficial ice roads to reach the nearest towns for supplies in winter while relying on airplanes in the summer. In areas with mining, such as in Nunavut, heavier industrial trucks transport equipment and freight across the ice if it reaches a thickness of 1.5 meters (5 feet) or more. In recent years, global warming has affected the thickness of the ice and has impacted northern industry negatively.

Ellesmere Island is surrounded by mountains and fjords, and has terrain too difficult to prepare an ice highway in the winter. The small villages remain isolated for the winter but have a small airfield for summer months as well as a small port for an annual shipment of supplies.

The Trans-Taiga Road is a gravel highway made to access the hydro-electric dams and stations in Northern Quebec. The road itself doesn’t lead to any town and ends 745km (463 miles) from any outpost of civilization. The most northern drivable point in the Northeast of Canada, somewhere around 54.4°, is located outside of Brisbay. It is only accessible from the James Bay Road, and dead ends in the middle of nowhere. One way in, one way out.

The Trans-Taiga consists of rough gravel in extreme terrain, so 4×4 vehicles with solid tires are recommended. Although summer months are warm, the weather is unpredictable and summer snowstorms are not unheard of. Preparation for unexpected events should include appropriate gear for all weather and potential tire blowouts. There is only one reliable gas station on the route and a few that are opened intermittently, so it is recommended to bring gas as well.

The road runs through taiga forests and has many hairpin turns. There is no cell phone service. A flat tire, running out of fuel, driving off the road, or any other issues can quickly become true emergencies. The hydro-power crews live in private towns that have no access to public traffic, and the hydro-power trucks have the right of way on the narrow road. This is an adventure that requires proper planning.

The Trans-Taiga is one of the more easily traversed roads of the far North. The terrain is generally flat and is one of the few places to experience nearly untouched forests. Wildlife is abundant, as well as lush evergreen forests. It does not come close to the Arctic circle.

Driving from Dawson, Yukon Territory on the Dempster highway eventually leads to Inuviak, Northwest Territory. Until November of 2017, this was where roads terminated in the summer. A plane was the only way to reach the isolated village of Contwoyto on the Beaufort Sea during the warmer months, and the ice highway was used in the winter. Since the Inuvik-Tuktoyaktuk highway was completed, it is now possible to drive the 137 miles from Inuvik to the northernmost point in Canada on an all season road, at 69.5° North latitude.

Prior to the new highway, villagers in Tuktoyaktuk relied on airplane service for food and supplies, which is quite costly. During the winter, the ice highway linking Inuvik to the village was less expensive and more convenient.

Now the highway has allowed tourists to visit the village, and a real restaurant has opened. The villagers hope that mining or some other industry will open in the region as well. During the four years of construction, many locals had been employed, and they look forward to the opportunity to engage in more activities outside of the village.

The highway also opened the path to the third coast of Canada, the Arctic Ocean. The hope is that tourists will be interested in driving to the most northern point in Canada and dip their toes into the Arctic.

In the harsh cold of the northern winter, the lakes and rivers freeze, and once the ice is at least 40cm (16in), it is possible to plow the ice so that the thickness can increase without the insulation of the snow. In many places, by February the ice can reach 1.5m (5ft) or more and can carry 70 ton trucks. Many localities rely on ice highways for supplies in the extreme conditions.

A core of engineers assesses and maintains the ice highways throughout the winter. They clear the snow, measure the thickness of the ice, and direct drivers away from blowouts, where ice has broken through to the freezing water below. Speeds are limited to 32kph (20mph) or less, and in some places, the trucks must crawl to prevent breakthroughs. High winds and low temperatures further add to the danger. The past few years have had the highest recorded temperatures and the ice no longer freezes as well as it should. The engineers must create solutions to unstable ice and small ponds to prevent deadly accidents.

Tibbitt to Contwoyto Winter Road is the ice road from Yellowknife to the diamond and gold mines in northern Nunavut. The road becomes as wide as an eight-lane expressway to accommodate the thousands of trucks hauling across the 595km (370 miles) stretch. A crew of 140 workers clear and maintain the road through the long nights and the bitter cold. This road passes the 70° North mark and is the farthest north that can be reached by vehicle in the winter. 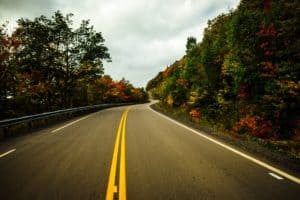 While it is possible to drive as far north in Canada as the 70° North latitude, the climate can be extreme. A 4×4 or four wheel drive, properly winterized vehicle is recommended, as a normal car may not survive. The ice roads are dangerous, although a team of professionals does everything possible to maintain safety. If all road rules are not followed properly, a dunk in the freezing water can result in death. This is an adventure that requires careful planning and research.

Traveling to Tuktoyaktuk in the summer is a less hazardous expedition. The road is gravel, and there are few gas stations on the road, but it is a rare opportunity to drive in the Midnight Sun through the tundra. The village itself may be sleepy, but the natural surroundings are amazing. A truly brazen traveler may even venture a quick dip in the Arctic Ocean. If nothing else, the adventurer can claim to have driven to the northernmost inhabited region of Canada accessible by road.