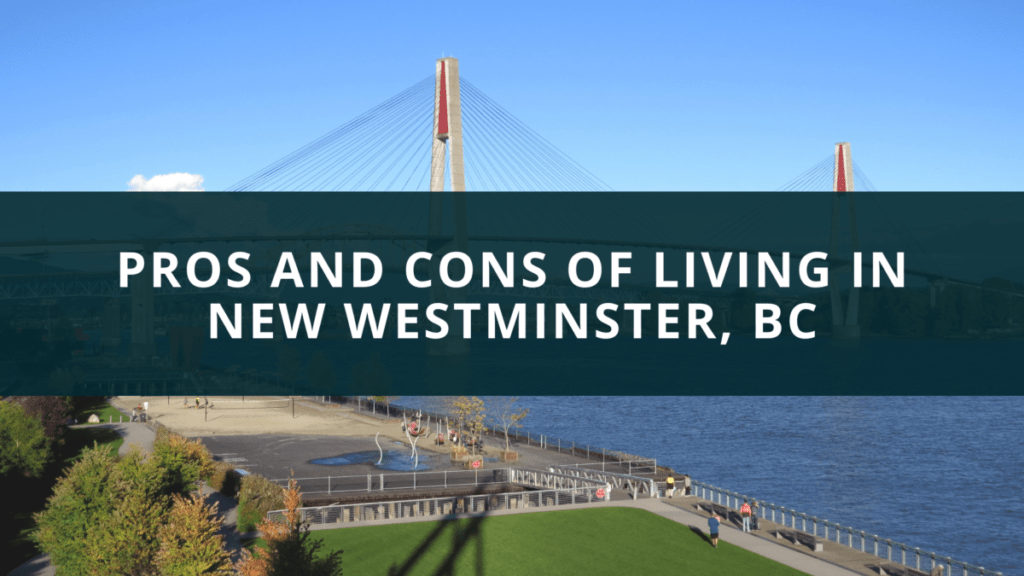 New Westminster is a beautiful city that offers residents and visitors alike many different advantages. However, there are also some disadvantages to living in this area. In this article, we will explore the pros and cons of New Westminster so you can make an educated decision on whether or not it would be right for you!

A lot of people want to live in the Lower Mainland, British Columbia because of its great climate, beautiful ocean and mountain scenery, and laid-back outdoors lifestyle. Some will decide against living in Vancouver city proper because of the high prices and crazy traffic, turning instead to some of the surrounding suburbs. New Westminster, BC is located just east of Vancouver along the Fraser River and is actually the original settlement of the area!

If you’re looking for somewhere to live in Greater Vancouver, BC, then New Westminster – or New West, as it’s typically called – should definitely be on your list of cities to consider. Here are some of the pros and cons of living in New Westminster, BC.

1. Near the Fraser River

The Fraser River is the longest river in British Columbia and cuts through many of the populated areas in the Lower Mainland, BC. New Westminster is set right on the river, with downtown New West just one block away. Not only is the Fraser River an important historic feature to the city – it was, after all, first capital of BC in 1859 – it offers beautiful scenery and awesome recreation features.

There is an expansive waterfront walkway along the Fraser River, stretching 2.5km from Westminster Pier Park along the Waterfront Esplanade Boardwalk. New West residents love this area for walking, biking, rollerblading, or just relaxing. The River Market (formally named and still affectionately referred to it as the Quay), is a shopping centre with a grocery store, restaurants, artisan shops, and other amenities that visitors and residents alike love.

New Westminster is a growing community, with new buildings and high rises going up and more people moving into the city. Because of the investment in the area, there are new restaurants, bars, recreation and entertainment options, and better transit in the area. Over the years, New Westminster has grown and developed into a prime location to live and work. Many young families who have been priced out of the Vancouver housing market have come to New West, creating a young, vibrant, community feeling.

Because of the growth and investment in the area, there are a ton of amazing restaurants that have popped up in New West in recent years. Top-rated restaurants such as El Santo (amazing Mexican food) or Piva (modern Italian food) are popular with residents and visitors. Bars and pubs like Kelly O’Briens, The Paddlewheeler Pub, or Sapperton District Taphouse are fun and offer a great place to relax and hang out. Most will also serve beer from the local craft brewery, Steel & Oak.

Besides restaurants and pubs, there are multiple coffee shops, small cafes and restaurants, and popular chains. There are so many great options that make New West a prime foodie destination!

As mentioned, a lot of young families have moved to New Westminster and it is a very family-friendly city. There are a number of parks and playground facilities, including Queens Park in Uptown New West, Hume Park near Sapperton neighbourhood, or Pier Park in downtown.

New West often hosts a number of events and festivals in the city to bring people together and engage in their community. Some of the most popular annual events include the food truck festival, Fridays on Front Street night market, and the summer yoga series. These events are popular with locals and visitors and make New Westminster a fun, lively, and community-minded city to live in!

Because of its location and proximity to other cities in the Lower Mainland, BC, New Westminster is well-connected through public transit. There are three SkyTrain stops (New Westminster, Columbia, and Sapperton Station) that connect New West with Burnaby, Coquitlam, and Surrey, and then by extension to Vancouver, Richmond, and North Vancouver.

You can get anywhere on the SkyTrain route within 1 hour from New Westminster, and it is only 30 minutes to downtown Vancouver. The New Westminster SkyTrain station is a draw to the area because of all the amenities available at the SkyTrain platform. There is a grocery store, multiple food options, a movie theatre, bank, and dentist – all available steps from the SkyTrain!

In addition to the SkyTrain, there are numerous bus routes and even the Q-to-Q commuter ferry across the Fraser River.

The proximity of residences are also very important in New West for a number of reasons. The distances between homes can be as little as one block away from one another on some streets – making walking or biking

Because of its location in between multiple cities, New West is a very heavily trafficked city. It is also a trucking route for long-distance transportation trucks, which can also create heavy traffic. Main roads of Columbia Street, Front Street, Royal Avenue, and the Pattullo Bridge are all very busy, especially during rush hour.

With the influx of new apartments being built, traffic is expected to increase. For this reason, many residents of New West choose to use public transit for their daily commutes. New Westminster is also a very walkable city, with a walk-score of 72, meaning that most daily errands can be accomplished on foot without the need for a car!

New Westminster is a rapidly growing city, and so multiple new high rises and condo buildings are developed each year – there are actually over 120 current projects either in the proposal or approved phase as of June 2021!

This constant construction can be disruptive to traffic, as roads are often blocked off or temporary detours are put in place. Additionally, there is significant noise pollution from the construction, particularly for those who live in the downtown New West area where most of the construction is concentrated. Someone who is very sensitive to noise may find it negatively impactful.

Because of its location on the Fraser River, downtown New West sits at a low elevation. That means the rest of the city is uphill from the downtown area. The hills in New West are no joke! Many people walk up the hill from downtown SkyTrain and transit to their homes in Uptown – it can be quite the work out!

The other downside (pun intended!) to the hills in New Westminster is that it can be difficult to drive when it snows. Though there are usually only 1-2 snowfalls each year, and only last a few days, it can be a real challenge to drive in the city with the steep hills and snow and ice making it slippery. Residents need to be aware of this and adequately prepare for snowfall.

Even though prices are cheaper than in Vancouver proper, New Westminster real estate has been steadily rising over the last decade or so as the area becomes more popular. New condos and apartments that are being built can be very expensive, with the average two-bedroom condo sitting at $580,000 CAD, according to recent data. New West also has a lot of designated heritage homes, which are beautiful and stunning, but generally out of reach for most people looking to buy (average cost of a 3-bedroom detached house is $1.4 million CAD).

There is a good rental market in New West, though, with many people accommodating short and long-term renters, including students at Douglas College. Rent can vary quite a bit depending on the location and neighbourhood, as well as age of the building or home.

Is New Westminster a good place to live?

New Westminster, BC is a great place to live. It has all the amenities of any modern urban centre: excellent restaurants and nightlife, parks for hiking or biking, museums and galleries as well as outdoor activities like kayaking on the Fraser River. There are also many opportunities here with Douglas College being one of Canada’s leading institutions.

There are many factors to consider when deciding if New Westminster is the right place for you: your preferences, cost of living, climate, and more. One of the best things about this city is that it’s close enough to urban centres like Vancouver or Burnaby while still being a manageable distance from smaller communities in Langley or Maple Ridge

link to What is a forecheck in hockey?

Continue Reading
link to How long is a hockey game?

When most people think of hockey, they imagine a fast-paced, action-packed game that lasts for hours on end. A hockey game is sixty minutes long, divided into three twenty-minute periods. However,...