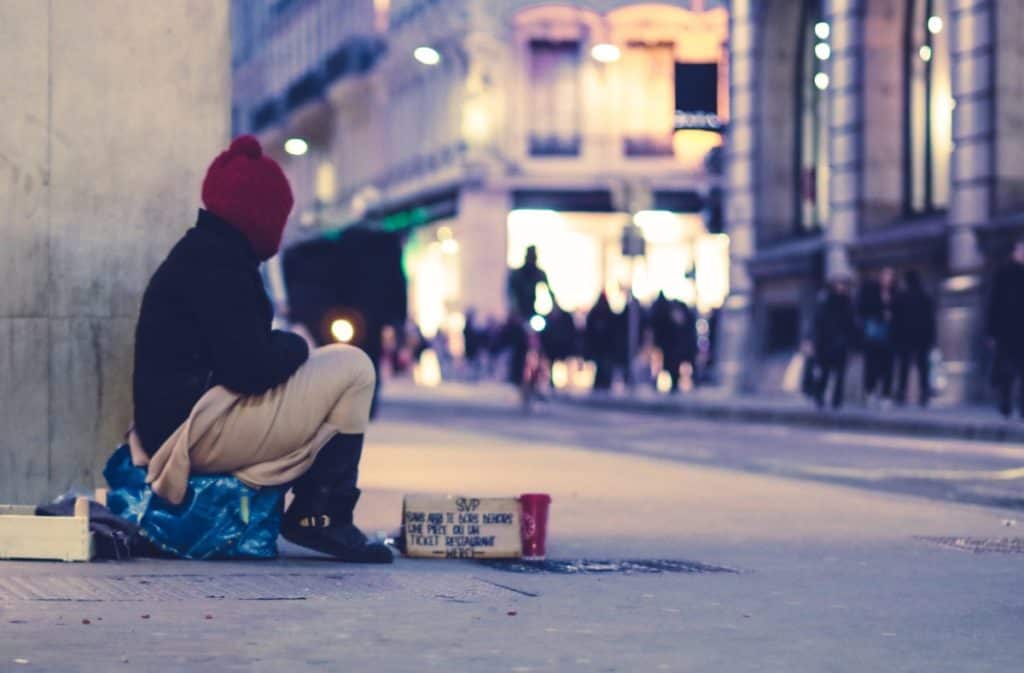 Toronto is a city of almost 3 million people, making it the most populated city in Canada. Whenever you have a large densely populated metropolitan area such as this you will, unfortunately, encounter amplified social issues. Toronto, in particular, suffers from a highly elevated level of homelessness, but why does this prosperous city specifically suffer from these problems?

Breaking down the root of why a particular area suffers from an epidemic of homelessness is a complex subject and rarely has one specific reason behind it. In order to better understand why homelessness is such an issue in Toronto, we need to explore the topic a little further.

The path to homelessness is not a straight and easily defined one, especially in a big city such as Toronto. There are a number of factors that can influence how an otherwise totally average person can find themselves out on the streets with no fixed abode to call their own. There may be multiple components involved in this process, no two cases are the same. Individuals that become destitute may have very little in common with each other, beyond their own unfortunate circumstances. What causes people to become homeless in Toronto?

Many people find themselves on the streets after they lose their jobs and are unable to secure further employment before their savings run out. Even high earning individuals are not safe from the threat of losing their home if they find themselves without employment, Anti-homelessness advocate Al Wiebe found himself living on the streets after he lost his $120,000 a year advertising job.

When a person loses their job and becomes homeless it can severely impact their ability to find work in the future. Without access to essential facilities such as clean clothes, the ability to wash their bodies, and regular sustenance homeless jobseekers are already on the back foot when it comes to job applications. Applicants may find it hard to get access to a computer and internet service with which to hunt and apply for jobs. When you consider the immense mental strain of everyday life without a home and the toll this takes on the mental wellbeing of individuals this only amplifies the already stressful process of job searching.

When someone is evicted from their place of residency, whether it is due to their own fault or no wrongdoing on their own part they become at risk of homelessness. Renters are already a vulnerable group with less income than those who own their homes.

Finding a new apartment may be difficult, even if the potential tenant has the means to cover the costs. Rental unit vacancy rates sit at just 1.5% in the area. If a person is unable to find a new place to live then it is inevitable that they will join the ranks of the other less fortunate residents of our city.

With property values soaring across the city of Toronto, it’s no surprise that unscrupulous landlords will turn to whatever means they can to get tenants out of their buildings so that they can increase the rental rates. Using an N12 a landlord may evict a tenant occupying their property by stating that they require the home for their own occupancy or that of an immediate family member. Dishonest landlords have used this method to evict residents from their homes with little to no possibility of recourse on the part of the former tenant.

Toronto has regularly ranked as one of the most expensive cities in Canada to live in. Globally it has consistently fallen in the top 50 most expensive cities to take up residence. Nearly half of all residents of the city are spending beyond the recommended 30% of their income on housing expenses. The waitlist for social housing in Toronto has grown by over 50% in the last decade.

The cost of renting or purchasing a property is outpacing the growth of wages for many people. When rents rise and wages stagnate individuals become at risk, even those in high earning jobs may be in danger when the average cost of a 1 bedroom apartment in the city center is north of $2,000 CAD per month.

A high cost of housing places individuals at risk. Overly expensive rents can make it hard to save for emergency funds. When an emergency fund is not available and a support network is not present, every little financial bump in the road of life can potentially lead to the loss of a place to live.

Breakups, divorces, the death of a family member, all of these can be key factors in a person finding themselves without a roof over their head. Victims of domestic violence are especially at risk of becoming homeless.

When individuals rely on personal relationships for shelter they become at risk of losing the roof over their heads when those relationships degrade. Reliance on other people for housing can also be attributed to other factors, such as a spouse who recently lost a job, a child with mental health issues, and more.

Approximately 30% of all homeless Canadians suffer from some sort of mental health issue. Many of these issues may not have existed before the individual person became homeless and instead can be caused by the stress of losing a home. Existing conditions can worsen when a person is placed in adverse conditions and is unable to seek the appropriate professional help.

Society has a tendency to demonize addicts, which leaves them more vulnerable than other groups within the community. Substance abuse can develop after someone becomes homeless, or it may be a pre-existing condition that the person was suffering from beforehand. Youths are especially susceptible to addiction and substance abuse, with 71% of runaway children reporting a substance abuse disorder.

Addiction may become a vicious cycle that makes it difficult for a person to break out of homelessness. Substance abuse and subsequent addiction can be a result of dealing with incredibly harsh and stressful conditions experienced when living on the streets of the city.

How many homeless people live in Toronto? 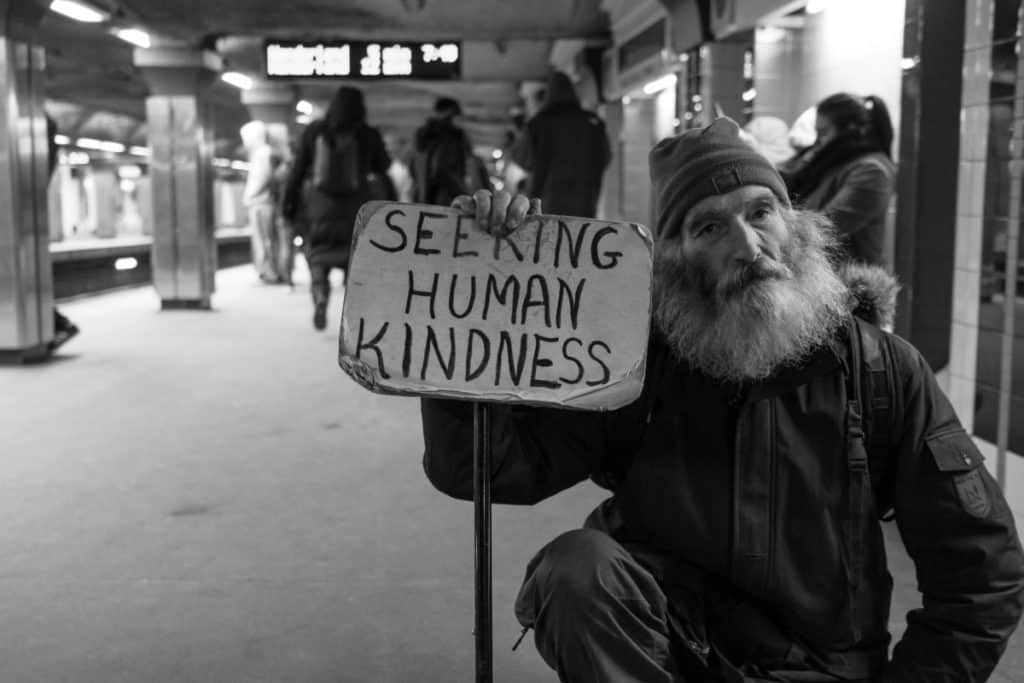 To obtain an accurate census of the homeless is difficult due to a lack of resources, social embarrassment on the part of citizens involved and uncertain definition of the term, but if you took a headcount on the streets of Toronto on an average night you’d find that there are over 9,200 people currently struggling with homelessness. Shelters in the city have a 98% rate of occupancy. The subsidized housing waitlist has ballooned to over 100,000 strong.

Is homelessness on the rise in Toronto?

The homeless population in Toronto has nearly doubled since 2006. Growing from approximately 5,000 individuals to the 9,200 or so living in the metropolitan area today. There is an increase in younger people in this demographic and the community is taking much longer to get off the streets than they did in the past.

Advocates have called for the city to declare the homelessness epidemic a state of emergency. It is clear that a long term plan of action is needed to address these growing social issues, but with every dollar dedicated to the cause spoken for by the time it is available to spend, this is a difficult issue to tackle.

What is the local government doing to combat the homelessness issue?

Growing numbers of individuals on the streets are placing a strain on the support networks such as shelters and social workers. With the extreme weather conditions that Canadian winters can bring, it is imperative that an infrastructure is in place to support those who find themselves needing shelter.

The shelter system currently offers spaces for up to 7,105 people. The winter services plan aims to add facilities to house another 500 for 2020, the administration has added over 2,500 beds to shelter services since 2015. Further services targeted at helping homeless individuals are due to be rolled out over the course of the year.

Toronto isn’t the only city in the world where people live on the streets. Studies have shown that as cities grow the number of people sleeping rough increases. Approximately 2% of the people on our planet are homeless and a further 20% were found to be living with inadequate housing. Canada specifically has an approximately 1% rate of homelessness.

In order to reduce homelessness, society needs to step up and help those most vulnerable individuals in order to prevent them from becoming a statistic. Services such as Housing First operate in Canada to provide people with permanent housing and resources or support they may need to get back on their feet. By impeding someone from becoming homeless in the first place it is possible to prevent them from falling into a vicious cycle that can be hard to escape from.