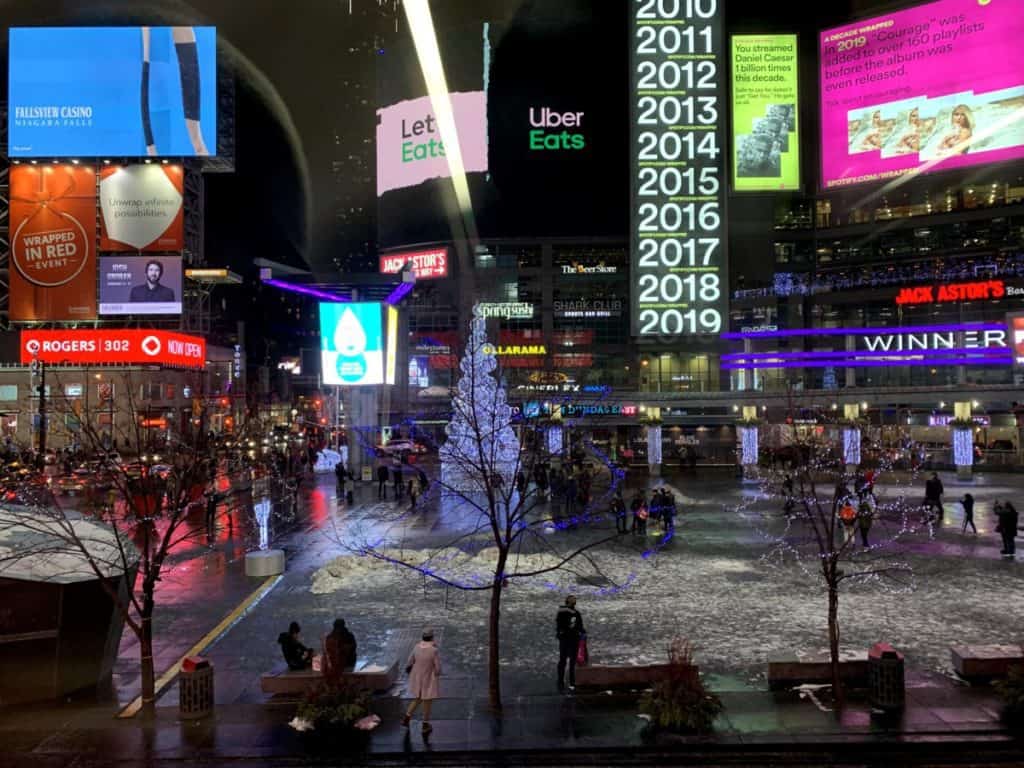 For the last 100 years, skyscrapers have become an expected part of every major metropolitan area. Toronto is no exception to this rule, but where did they all come from and why does Toronto have so many skyscrapers? To answer those questions, today I am going to explore the origins, history, and future of Toronto’s tallest offices and historic sites.

The Differences Between a High-Rise & a Skyscraper

Toronto’s tallest and most iconic silhouette in the skyline is undoubtedly the CN Tower, but is it even considered a skyscraper? The answer to that is no, as a skyscraper is typically defined as being a habitable dwelling at least 500 feet high with around 40 or more floors.

Now that I’ve defined what a skyscraper is, that would mean that the actual tallest skyscraper in the city is the First Canadian Place building, which is also the tallest skyscraper in all of Canada. It was built in 1975 and was originally known as “First Bank Tower” at the time, largely due to the Bank of Montreal being the chief tenant, which has become their iconic home to this day. You can find BMO occupying the bottom floor of the tower, which is impossible to miss if you’re downtown on King St W.

The Reason for Toronto’s Skyscrapers

Why did they build this and other tall offices here and in big cities across the world? Skyscrapers become financial considerations in any large metropolis where real-estate prices in the downtown or commercial areas become astronomically expensive. There is a limited amount of space on a plot of land, but the land value is so high in these dense areas that it makes financial sense to construct as many units, floors and rooms as possible into a single construct. This maximizes potential revenue on a given piece of land and is the practical reason for constructing them, but there is one other big factor that causes companies to finance their construction: bragging rights and getting publicity.

As I just mentioned, the goal of a skyscraper is to maximize the amount of usable room, while using the least amount of land to do it. But if that’s the case, why do we make structures that are not skyscrapers? The reality is that constructing one of these tall projects costs an extremely high amount of money, so it is not practical to make every office or apartment into one. It only makes sense to build them in places where there is a high demand for offices or residential units, but the land is expensive and hard to come by. Which is exactly the conditions you have in Toronto.

That means that big cities have so many skyscrapers because the land in those areas is highly coveted and extremely valuable. It is financially viable to spend tens of millions of dollars constructing these massive structures, simply because they will generate many more millions of dollars in revenue for their owners. The reality of the situation is that skyscrapers are a measure of a city’s economic success, and the more there are in an area, the more in demand and successful the region is.

Aside from the practical benefits of these massively tall structures, there is also a promotional angle that some wealthy investors and city officials like to aim for, and that is getting in the record books, making the news, and otherwise making the real estate worth more by making it noteworthy. Almost everyone in the world knows about the Empire State building in New York, simply because for nearly 40 years it was the tallest building in the world. It’s been a long time since that was the case, but the fame of the property lives on. When investors greenlight a new skyscraper, if they have the resources to build a world-class or record-breaking project, it can help bring local, regional, and international attention to their property, which drastically increases the value of the investment.

The Rise of the Tall 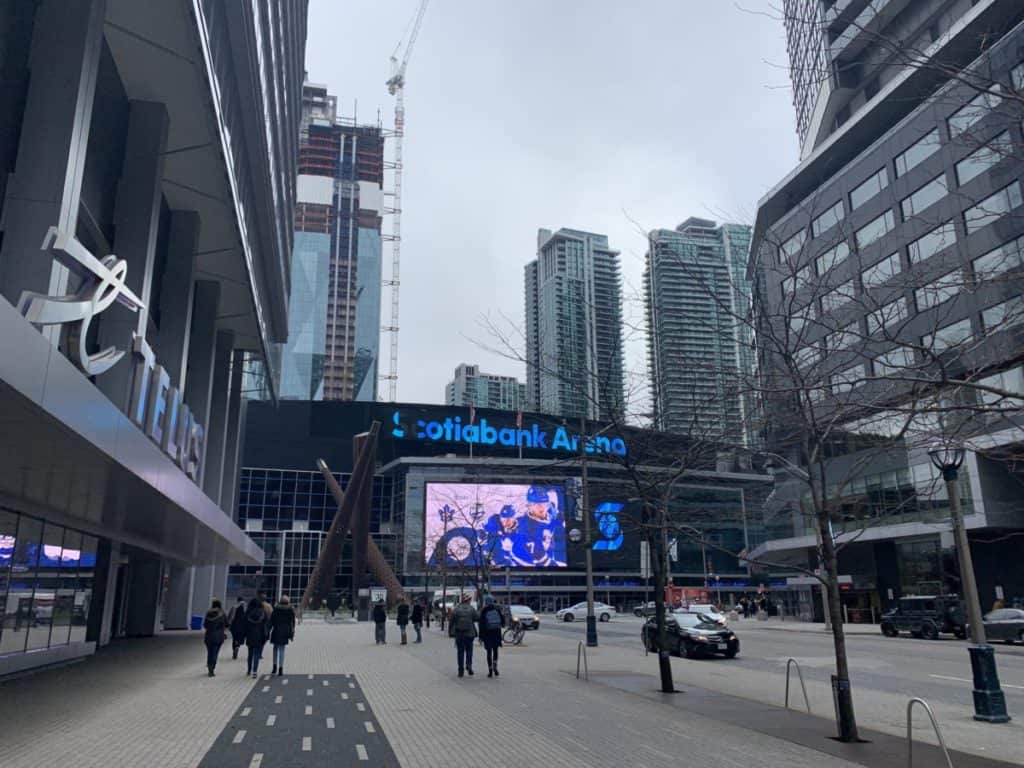 Okay, so now we’ve covered the fact that skyscrapers are built to maximize space while using the least amount of land, but why has that turned into so many tall structures specifically in Toronto? The answer is that the city has a lot of demand for offices downtown, while there are very few open land plots to develop on.

In big cities like Toronto, the open land in downtown areas started to become considerably more and more scarce 50 to 75 years ago. This meant that there was eventually not enough supply of land to keep up with the growing demand. Once we moved into the era of skyscraper construction, these tall structures became one of the solutions for the limited amount of land available in these desirable cities.

The area saw a boom in construction starting in the early 1970s, which slowed down in the 80s, before picking back up in the 90s and 2000s. Today, there are thousands of structures in Toronto that are near skyscraper size, but most fall just short of that classification. However, there are over 200 literal skyscrapers in the city today, with another 40 or so under construction or in the planning phases.

That’s right, as we head into the future and prime metropolitan locations become even more scarce, you can expect savvy investors to build more and more skyscrapers to maximize the return on their land. If skyscrapers aren’t your thing, don’t worry though, in big cities today, there is not much room downtown for a lot more of them, and in smaller cities, they are not economically viable to build. They are only constructed in relatively wealthy and densely populated cities like Toronto.

A History of Giants

So far, I’ve focused on modern construction, but the first eye-catchingly tall hire-rise in the area was built in 1894. It was called the Beard Building and while it was only 7 stories high, it was ambitious and extremely tall for a structure from that time period. Although this is nowhere near the size of a skyscraper, it does mark the beginning of high-rise construction in the city, something which continues to this day. Coincidentally, the location of the Beard Building was just a few blocks away from the current location of First Canadian Place.

The Beard Building was only the tallest for a couple of years before the Temple Building displaced it as the tallest in the city by over 30 feet. It remained the largest occupied dwelling in the city for a decade until 1906, when competition for the tallest office in Toronto heated up.

While the Temple Building enjoyed 10 years as the tallest, the next decade would see the crown for tallest dwelling in Toronto change hands 3 times. It started in 1906 when the Trader’s Bank Building was completed and it measured another 20 feet taller than the Temple Building. This massive and historic 15-story high-rise still stands today, but it was only the top high-rise office for less than 6 years before the next project superseded it.

The Canadian Pacific Building then briefly took the crown, but within 3 years the Royal Bank Building finished construction, and this behemoth was an order of magnitude bigger than the Canadian Pacific Building. The Royal Bank Building enjoyed 13 years as the tallest office before a boom of 3 massive buildings successively outdid each other in height in 1928, 1929 and 1931. The last of these projects to be constructed, Commerce Court North, remained the tallest in the area for over 35 years.

In the mid-60s to mid-70s, there was the first big boom of actual skyscraper development in Toronto. During this time period, Toronto-Dominion Bank Tower, Commerce Court West and then First Canadian Place were all constructed, each successively becoming the tallest in the city. These buildings all had over 200 floors and measured from 731 feet up to 978 feet (First Canadian Place.)

Since 1975, no other occupied structure in Toronto or Canada has superseded the height of First Canadian Place, but there has been plenty of skyscraper construction in the city and many others in the country.

In today’s article, I set out to figure out why Toronto, in particular, has so many skyscrapers. The answer I came to is that it is the biggest city in Canada, and thus it is an epicenter of business, commerce, and people. The price and scarcity of land available in downtown Toronto make it the ideal location for constructing, owning, leasing or occupying skyscrapers because it allows so much otherwise unusable space to become offices, businesses, and homes for people to live and work in.

Any large city with millions of people will benefit from the particular space-savings that each skyscraper provides. Toronto is full of skyscrapers to help make the usable space in the downtown area exponentially larger than it would with normal size dwellings and offices. There is a rich history of tall buildings in the city which undoubtedly will continue long into the future.