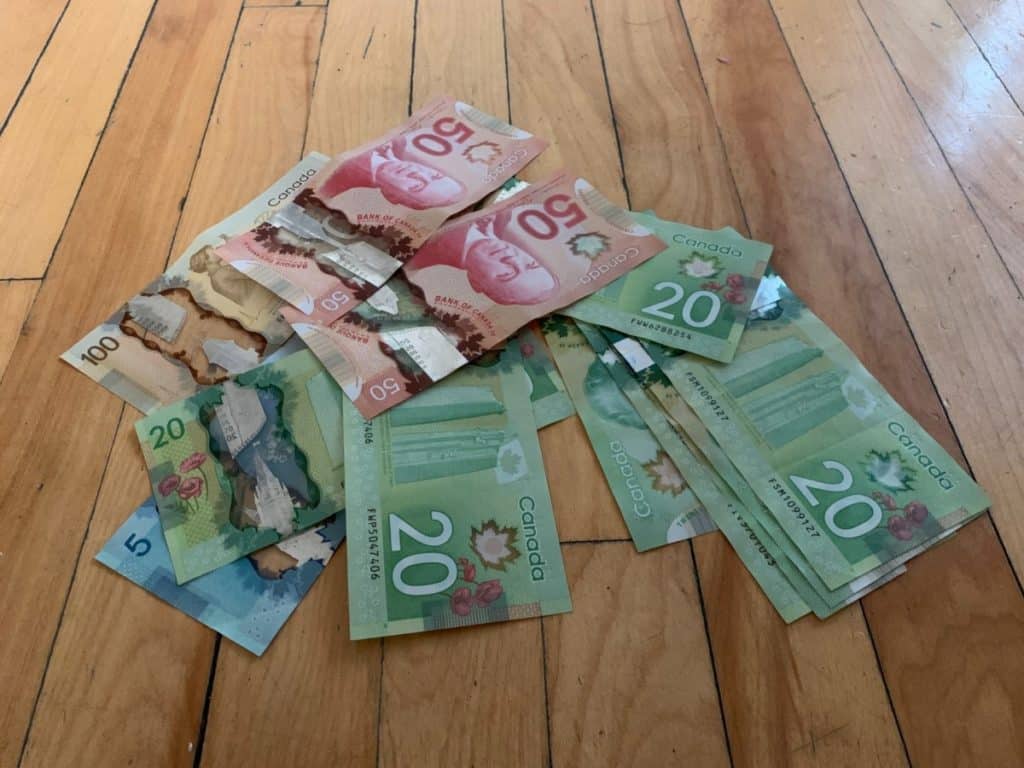 There are two things you might notice when it comes to Canadian currency. First, Canadians regularly use one and two-dollar coins in their daily transactions. Second, the banknotes in the country come in various colours.

People from all over the world call Canadian money various things. Some people refer to it as “rainbow money” or “Monopoly money.” But there are some useful reasons as to why Canadian money has all those colours.

What Are These Colours?

To start, let’s look at the specifics surrounding Canadian banknotes. The colours of these banknotes are as follows:

They’re also used to be a $1,000 note with a red-purple tint as well as $1 and $2 notes, but those bills are no longer in circulation. Some of those retired bills are still in circulation, but they may not be legal tender.

The Same Colours Regardless of Who’s On Them

One point about these banknotes is that the same colours appear on each one regardless of who appears on them. Whereas American bills have only one person on them, Canadian ones can feature various people or scenes. For instance, the front of a $5 blue bill features an image of Sir Wilfrid Laurier, one of the country’s earliest Prime Ministers. But the reverse side can include a unique scene. Some versions of the $5 note feature an image of the Canadarm Space Shuttle system. Other versions include a drawing of kids playing ice hockey with a quote from Roch Carrier’s “The Hockey Sweater” next to the image.

The $5 note remains blue regardless of the design features. The effort is to simplify how transactions work. People can collect bills with unique designs as collectibles.

Blue, Purple, Green, and More – Why Is Canadian Money Coloured? 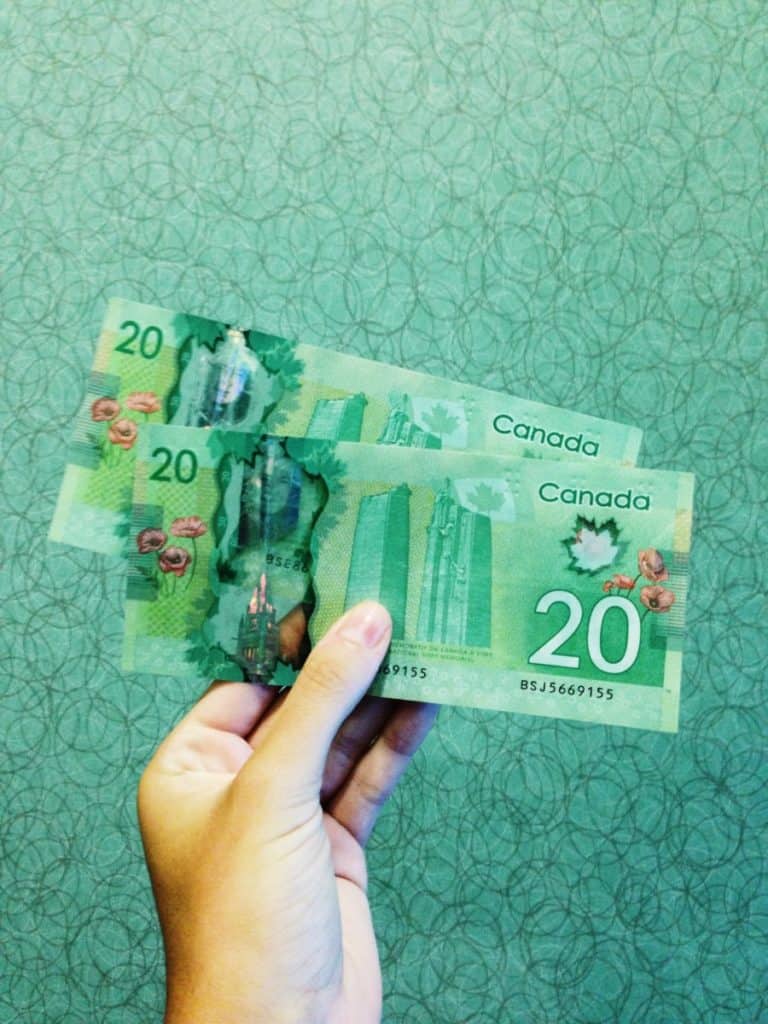 The main reason why Canadian currency comes in so many colours is to ensure people can tell them apart. While each bill has a different person on the front and image on the back, the colour system makes it easier for people to sort their money. A person can store the paper in a wallet or purse and then have an easier time finding the proper note one wishes to use.

The effort beats having to fiddle around a bunch of similar-looking notes to try and find ones with the proper value. Anyone who’s been in the United States and has tried to find specific dollar bills understands this concern.

Many ABMs or automated banking machines around Canada will have an easier time reviewing banknotes with specific colours. While the designs on these notes can vary, the colour scanning features on ABMs make it easier for them to dispense or accept these notes.

The same principle goes for vending machines. With such machines appearing throughout Canada in varying forms, it helps to have notes a device can identify without issue.

The different colours on these notes also make it easier for people who have difficulty to see to identify them. For those who have colorblindness issues, the varying tones on each bill are simple for people to confirm. Some colours might be muted, and others may be distorted, but it won’t be hard for people to tell them apart.

There’s another contingency for people who cannot see anything or those whose colorblindness concerns make these look similar. The top right part features a few dots that blind people can use to distinguish the value. The number of dots will vary based on the note value. The Braille dot system simplifies the process of figuring out what one currently holds.

Canadian banknotes come with many security features, from a maple leaf hologram to a clear stripe at the end. The “Bank of Canada” and “Banque du Canada” text features are also slightly raised. High-value bills also feature metallic portraits that match up with the larger one on the front.

The colours on Canadian bills play a role in the security effort as well. While there is a general base tone for each note, there will be multiple shades all around. You will find both light and dark hues around the body. A few gold accents or tones may also appear on some notes for added protection.

The dense colours and arrangements on each note make it harder for people to copy them. The additional hologram, transparent features, and raised text spots make it even more of a challenge for people to forge copies. 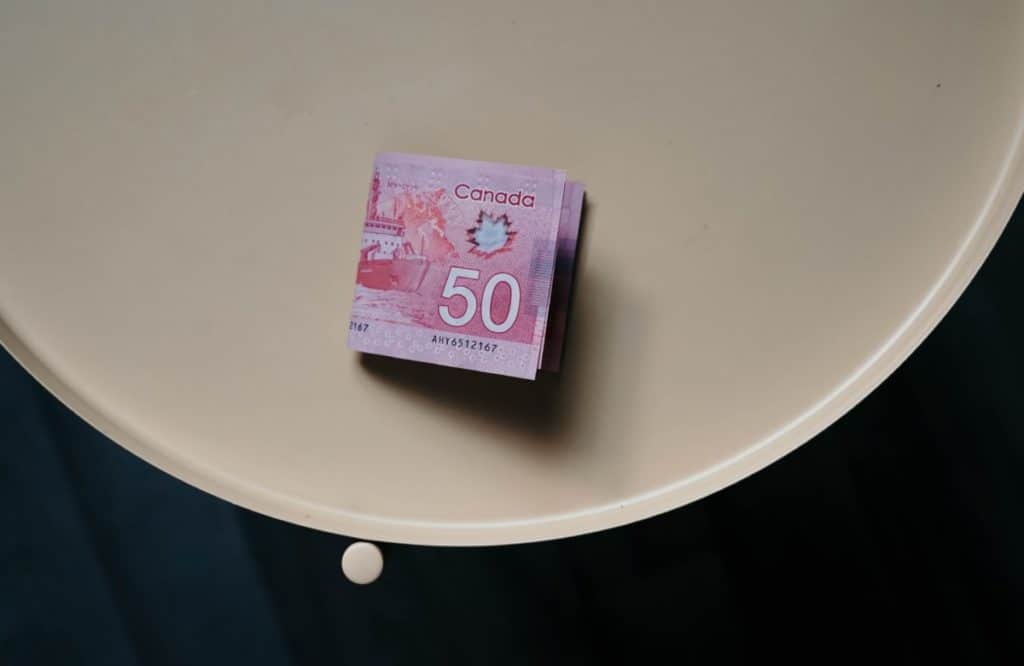 One of the principles the Bank of Canada uses when producing banknotes entails how the currency appeals to Canadians. The design of the bill has to be agreeable and pleasing to Canadians.

6. How Does It Figure Out the Appeal?

The Bank of Canada uses a few steps to note how the designs on its currency will work. First, the Bank consults with Canadians from around the country to see what is suitable. People will have ideas for what images should appear on bills, not to mention the subject matters or themes. The Bank’s goal is to find ideas for what works.

The Minister of Finance will then approve of the design. The effort ensures the bill looks its best no matter what colour goes on the bill. While it might be challenging to figure out which note a person or subject should appear on, the goal is to produce a layout that fits in well regardless of what colour it will feature.

The recently-released $10 vertically-aligned bill featuring racial equality pioneer Viola Desmond is one example to note. Plenty of design efforts went into ensuring the story of Desmond’s work, and her impact would be well-reflected. But the purple colour remains the same.

One other part of why Canadian currency has various colours entails the national pride it brings. Canadians are appreciative of the many things in life that make the country distinct.

The Bank of Canada even says this itself. In 2015, when residents in parts of Quebec were cutting $20 bills in half to try and make two $10 notes, the Bank of Canada said that altering or adjusting these bills is inappropriate. The argument was that the currency is a part of the country’s national pride.

Also, in 2015, Canadians were defacing their $5 bills in honor of Leonard Nimoy, the actor who had passed recently. The image of Wilfrid Laurier on the bill could be adjusted to make it look like Mr. Spock, Nimoy’s character on the television series Star Trek. The Bank of Canada also remarked that the bills as a source of national pride, and those users should not deface them. Altering these notes can interfere with security features, thus making it possible for vending machines to refuse them.

What About the Toonie?

There is one coin that deserves to be noted surrounding its colours. The two-dollar coin, or the Toonie, features a two-color layout that entails two metal pieces locking together through a mechanism patented by the Royal Canadian Mint.

The tones on the toonie come from the metals used to produce the coin. The inside part features a brass body, while the outside has a steel coating with a nickel plating. The design provides the distinct style of the Toonie, not to mention it is also harder to duplicate.

Coins predating 2012 use an aluminum-bronze centre. But the dark tone remains the same. The design makes it easy for all to distinguish the two-collar coin from a one-dollar coin that features one brass colour.

Not the Only Country

Of course, Canada is far from the only country that uses coloured money. You’ll find banknotes with various colours in many other countries around the world. Currency in India, Thailand, the Philippines, and Australia come in many tones depending on their values.

Be sure to look at what you come across when finding Canadian currency. You’ll find that it comes in various appealing colours. The designs on each piece of currency make them great collectibles. Best of all, the colourful world of Canadian money is something that all around the country take pride in and appreciate. You’ll also enjoy how it is easier for you to find what you need without having to search through your wallet for too long to find something.