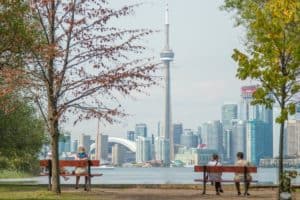 The city of Toronto has many nicknames – The 416, T.O., Queen City  – to name a few, but the most common of all is the nickname “Hogtown.” Why is Toronto called Hogtown? A good question! This article will address this question seeking to explain how Toronto came to be known as “Hogtown.”

Why is Toronto called Hogtown? There are several theories as to the origin of the nickname. A much more likely origin of why Toronto is called Hogtown is that there was a time in the city’s history that hogs outnumbered the people. With both the presence of an extensive hog lot and slaughtering operation, with the quality cured ham and bacon that came from those hog lots and production lines, it is said that the nickname “Hogtown” was given to Toronto. It should be said that this story is a very popular theory of the origin of the Hogtown nickname for Toronto.

There are several theories for the name’s origin; some of the theories are not very plausible, but we will look at them anyway to round out our search. This article will then examine two more plausible theories for Toronto’s familiar pet name. By looking at all of the known theories for the origin of Hogtown, we will gain a better view of where the nickname comes from.

A brief History of Toronto

To begin, let’s first look at the history of Toronto itself. The first human inhabitants of what would be Toronto were the First Nations people who lived in the area for centuries. In the 1750s a French fur trade fort was established in the area and a small community grew around the post. After the region came under the control of Great Britain following the French and Indian War, a town was established in 1793 by the governor of Upper Canada, who named it York. This new town was founded as the capital of Upper Canada, setting the stage for Toronto of getting its common handle – more about that later.

The name Toronto was derived from the waterway between Lake Simcoe and Lake Couchiching and came to be applied to the original settlement. In 1834, the citizens of York petitioned to have their town’s name changed to Toronto, and in 1867 when Canada gained nationhood, the city became the Provincial capital of Ontario. Toronto experienced rapid growth from an influx of immigrants, reaching a population nearing 200,000 by the end of the 19th century and continued its growth throughout the 20th century to the present. Toronto is a major financial center and as a flourishing modern city, it now stands as the fifth-largest city in North America, with a population of just under 3 million.

The Origins of a Nickname 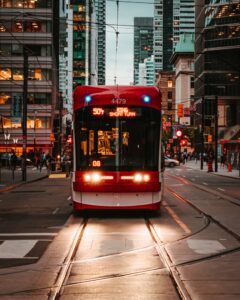 With the William Davies Company hog products sold throughout the entire country and abroad, the story goes, that the city of Toronto was increasingly referred to as Hogtown. This was both an affectionate nickname and an insulting epithet at the same time. The sprawling stockyards was a truly unpleasant sight – and smell – to behold and anyone going anywhere near the packing plant would have had a strong negative impression. But the quality of the William Davies Company’s products was world renown, surpassing the quality of all other Canadian or even U.S. packing plants. With both the presence of an extensive hog lot and slaughtering operation, with the quality cured ham and bacon that came from those hog lots and production lines, it is said that the nickname “Hogtown” was given to Toronto. It should be said that this story is a very popular theory of the origin of the Hogtown nickname for Toronto.

Contemporary newspaper articles and editorials show that this diminutive was used prior to the heyday of the William Davies Company’s success and used to mean something separate from the packing industry. “For most of its history,” said an 1896 Evening Star writer, “Toronto has been one of the largest cities in Canada, and if there was one thing the smaller cities resented it was a tall poppy, it seems. Toronto affairs dominated Queen’s Park and took time away from other issues, much to the resentment of members of the legislature.” Similarly, in an 1898 Globe editorial, it was said, “In the smaller cities of the Province when a man wants to say nasty things about Toronto he calls it Hogtown.” “The remark originally had no relation at all to our friend the hog,” the Globe wrote again, “but was merely intended to convey an impression that the citizens of Toronto were porcine in their tendencies and had their forefeet in anything worth having (“How Toronto Got Its Various Nicknames”).”

From these sample newspaper articles, it can be seen that the nickname “Hogtown” was derived from Toronto and Ontario politics and not because of its extensive hog processing plant. What’s more, residents of Toronto enthusiastically embraced the insult.

We have looked at the various theories for the origin of Toronto’s popular nickname. We saw that the best source of the nickname comes from the extensive hog processing and the “hogging’ of Ontario politics. Which theory is the correct one? You decide!

An interesting side note about Toronto being known for the hog is that other Canadian cities are nicknamed for animals as well. Calgary is known as “Cowtown” and Hamilton is known as “Tigertown.” So it’s more than okay for Toronto to be known as “Hogtown,” right?