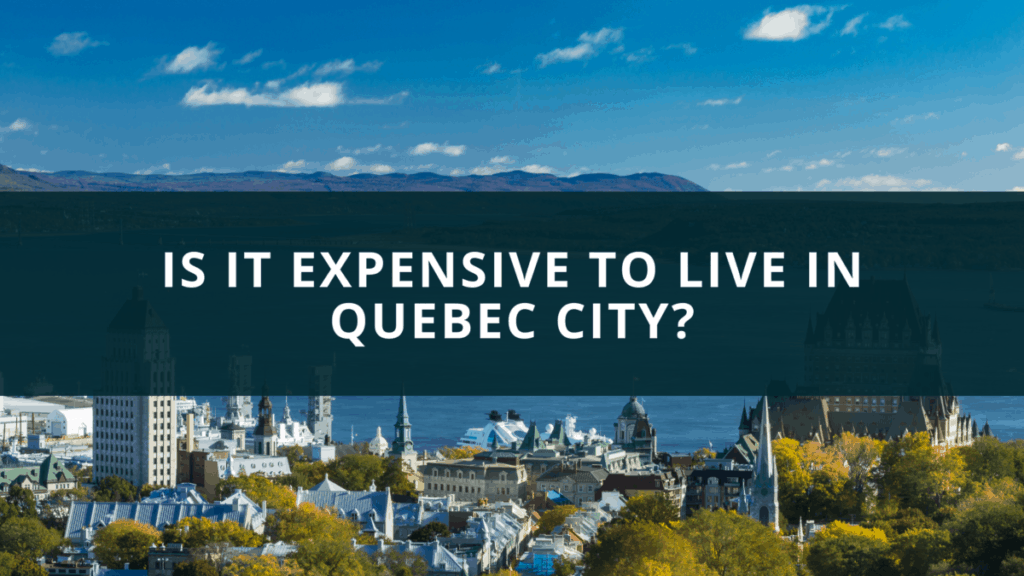 Quebec is a Canadian province with a population of 8,439,9225 people and an area of 595391 square miles. It is surrounded on the west by Ontario, on the North by Hudson Bay, on the south by Maine, Vermont, and New York, all part of the united states of America. It is the largest province by area, the second most populated after Ontario, and the only city with a largely French-speaking populace.

Living in Quebec City is not as expensive as many people would think. While the cost of living in Canada’s eighth-largest city may be higher than some other parts of the country, it is still well below what you might find in major cities like Toronto or San Francisco. The reason for this should come from a mix of lower wages and cheaper housing options.

How Much Money Do You Need to Live Comfortably in Quebec City?

Quebec’s average monthly earnings are relatively lower than most Canadian provinces, with $2,511 per month yet the province offers an exceptional quality of life for a couple. Cost of living in Quebec is low when compared to the other cities in Canada and its environs.

Living in Quebec City has a lot going for it, but with these lower wages and cheaper rent prices come some sacrifices that may not be worth it for everyone.

The quality of life is excellent: there are great education options, lots of jobs available, and an active social scene. Yet salaries tend to lag behind other parts of Canada (or even Montreal), so those seeking high-powered careers might want to head elsewhere more often than not.

Is Quebec City cheaper than Montreal?

The cost of living in Quebec City is lower than in Montreal. There are some sacrifices that come with living in Quebec City, such as low-paying jobs and the lack of a large population to draw from for employment opportunities. This can make it difficult to find work if you’re not willing to commute far distances on a daily basis.

Is Quebec City worth the cost?

Quebec City has a wide range of cultural characteristics that make it an excellent option for expats and tourists alike.

There are so many benefits of living in Quebec City such as:

However, the Quebec government taxes residents a little more than other provinces in Canada and there are some negatives as well. Montreal is nearby so it might make sense to commute if you’re used to big city living.

Additionally, the cost of housing can be expensive for those who want to buy their own home or rent an apartment on the outskirts of town with monthly payments that rival Toronto prices but without a comparable salary. And while education is excellent—there are universities both public and private-tuition fees may take up over half your income depending on which school you choose.

If these sound like good tradeoffs for what would otherwise be a steep price tag, then consider making Quebec City your new home.

What about other Cities in Quebec province?

The Canadian province of Quebec has a distinct cultural identity that distinguishes it as one of the world’s top educational destinations.

Montreal is Canada’s second-most populous municipality and the most populous in Quebec. The city of Montreal sits on an island, which means that it has a distinctive layout, unlike any other North American urban area. In 2016, its population was 1 million people with 49% speaking French as their primary language – after Paris! It’s one of the world’s largest Francophone cities outside France itself!

The Ottawa-Gatineau region is the official government name for Canada’s capital, and it has a lot to offer. The National Capital Region was formed by combining Ontario’s Ottawa with Quebec City Gatineau in order to make this area more unified both culturally and politically. Spread over 90 kilometers of land close enough for locals not to have trouble going back and forth from one state or province into another without crossing an international border, there are several ways tourists can get acquainted with all that this place has on offer while they’re here!

The city of Sherbrooke is the perfect place for those looking to connect with their cultural roots. With a population that stands at 161,323 and an additional 212105 people in its metropolitan area, this region offers plenty of opportunities not only for education but also for entertainment. The French language dominates here as it’s spoken by 90.6 percent of the total inhabitants while English (5.6%), Persian, Serbo-Croatian languages Arabic and Spanish round out the list respectively speaking 5%, 1% 4% 3%.

Quebec City is a beautiful and affordable place to live. With so many many different types of jobs available, with the low unemployment rate. The city also has low housing costs as well compared to other cities that are nearby. It’s easy for residents to make their way through the day without getting too stressed out on transportation because they have access to public transit which helps keep traffic down during peak hours.

It might seem like it would be more expensive than what you could find living somewhere else but It all boils down to personal preference – so think about what will make YOU happy! :).