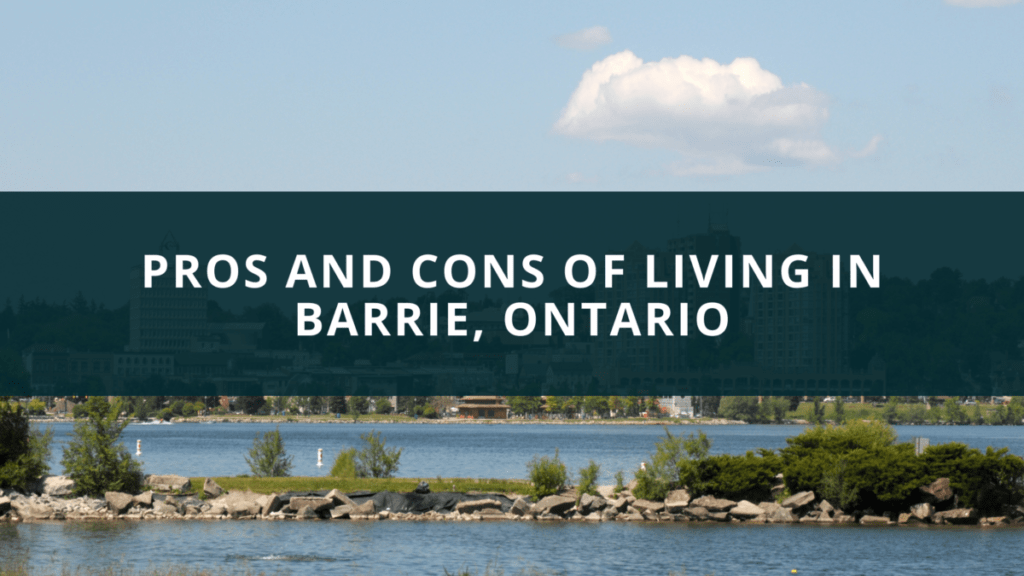 As housing prices drastically increase in the Greater Toronto Area, many people are thinking about relocating to neighboring cities with more affordable options, such as Barrie. From an emerging bedroom community to a census metropolitan area inhabiting over 100,000 residents, the City of Barrie has grown substantially over the last few years.

According to Zolo, Barrie is now considered the third most affordable city in Ontario. However, there are many more factors to consider before relocating than just affordable housing options. Therefore, to help you make the right decision, we have put together a list of the pros and cons of living in Barrie, Ontario.

Did you know that you could live anywhere in Barrie and still be only approximately ten minutes from Highway 400? Barrie’s prime location makes it an attractive city for everyday commuters to Toronto and seasonal tourists heading north.

You will also find that Barrie’s amazing transit network also includes a strong public transport system. Residents can use the Barrie Transit system for moving around the city locally, or the Go Transit network (busses and trains) for commuting to various popular communities within the Greater Toronto Area.

If you are looking for affordable housing away from the main city of Toronto, then Barrie is a great place to invest. According to the Canadian Mortgage and Housing Corporation (CMHC), Barrie and other neighboring communities have recently seen an increase in purchasing behaviors from GTA buyers.

Barrie’s exponentially growing real estate industry enables buyers to invest in properties as low as $580,000. This means that people with average higher household incomes can afford to settle down in Barrie and still be close to other cities in the GTA for employment purposes. The public transport system and vast transit network facilitate daily commute to neighboring GTA centers while also enjoying a range of housing options for ownership.

Compared to other growing cities in the region, Barrie has one of the lowest crime rates reported. According to Canada Statistics, Barrie’s low crime severity index score makes it the fifth safest place among other census metropolitan areas. This means that Barrie has a strong cultural and family-oriented community that opposes gender discrimination and promotes community cohesion and wellbeing. If you are looking for cities that offer safe communities, then Barrie should be high on your list. Moving to Barrie is not only a safe investment but also ensures safety for family and self.

Having reliable healthcare nearby should be a determining factor when choosing a place to move or relocate. There are several general practices and dental clinics in Barrie that cater to people with registered family doctors and those without. The only hospital in Barrie, the Royal Victoria Regional hospital, is also the largest health center in the whole of Simcoe Muskoka district. It is also considered the regional hospital for the area. Thus, catering to a vast geographical area from central Simcoe country to Essa Township. As a key healthcare provider, the hospital also has one of the best and busiest emergency departments in Ontario.

With amazing healthcare services nearby, residents can easily preserve their quality of life and rest easy knowing that they will be well provided for even after retirement.

If you are worried that Barrie may not offer much in terms of outdoor activities, then think again. There are several recreational opportunities to explore in the area ranging from water sports to snowboarding and even trekking the beautiful landscape.

The strategic location of the city ensures easy access to various ski resorts in the north and the south. For example, the Horseshoe Valley in the north has resorts at Blue Mountain and Mount St. Louis. You will also find that the city is bustling with summer activities during the warmer months. There are beautiful beaches at Centennial Park with boat launches for the avid sailing enthusiasts who want to explore Lake Simcoe. For more information about activities, check out Barrie’s Sports and Attractions page.

With an ever-growing commuter population, the residents of Barrie may find it cumbersome to get from point A to B in prime time. Although there are active efforts to promote public transportation and inter-city commuter trains, many people still opt for driving on their own to different areas in the GTA. As a result, the traffic is horrible, especially during rush hours when road congestion is at its peak. Perhaps this is the cost of living away from the hustle-bustle of metropolitan cities.

Although Barrie is one of the fastest-growing cities in Ontario, its home economy still has a long way to go. Many residents are commuters availing employment opportunities in the neighboring GTA. When large corporations like General Tire and General Electric closed down operations almost 15 years ago, the city faced a serious industrial shrinkage that seriously impacted the local job market.

Since then, the city’s non-commuter residents rely on opportunities created by the hospitality and manufacturing industries in the wider Simcoe County Region. However, these are limited and divided among the region’s population. There are also seasonal opportunities because of the vast variety of activities in the area; however, these tend to fluctuate and can not be considered a permanent source of income. On the flip side, the good news is that activities are happening throughout the year so residents can cycle through many of these to sustain themselves.

When people talk about finding affordable housing in Barrie, it’s usually in relation to the sky-rocketing real estate prices in Toronto or the neighboring GTA. This means that while it may be easier for commuter residents to become homeowners in Barrie because of their city salaries, locals are finding it increasingly difficult to afford a house. There is essentially a negative spillover effect of increased commuter purchases. The Canadian Mortgage and Housing Corporation (CMHC) found that the rising home prices in the GTA may be a motivating factor for potential buyers to invest in neighboring commuter towns. However, this is also shooting up prices in these real estate markets thus, becoming a driving force for locals to migrate elsewhere.

If you are not a fan of exceedingly cold weather, then perhaps Barrie is not the best city for you. Although all of Canada experiences different levels of cold weather, Barrie tends to be one of the cities with the longest winter. On average, Barrie has six months of cold weather from November till late April, where the temperature can be below freezing throughout the day. If you are planning on living in Barrie, be prepared to experience treacherous freezing days at least 67 days a year. On the bright side, you will never run out of fuzzy socks and will always have a white Christmas to look forward to every year.

Is New Barrie a good place to live?

Some people may find living in a busy city like Toronto or Vancouver more appealing than the slower pace of life found in Winnipeg, Manitoba. Regardless of which type of lifestyle appeals to you most, it’s important that you make an informed decision before making any commitments about where and how long to live your life.