Have you ever wondered how it is to live in Canada? Deciding about a place as a new immigrant to a foreign land requires quite a bit of research.

Do not worry, I have you covered on that front. Life in Canada is rich and diverse in terms of mutual respect for one another, equality of communities living together, and friendliness.

If you are looking for a vibrant life cycle, with schools, parks, recreation, nightlife, outdoor, metro city, shopping, and pretty much any aspect of it all, you are going to make a smart choice with Mississauga.

The list of both advantages and disadvantages of living in Mississauga is plenty, on the positive side, Mississauga has Diversity, safe neighborhoods, closer to Toronto, an international airport nearby, good educational institutions. On the negative side, Moderate to high housing rates, high property taxes, and noise pollution caused by the nearby airport.

The city has evolved to skillfully deal with the newcomers in the form of an excellent and intricate system of public service amenities.

The city was awarded the best place to live in by ReMax (ReMax 2019 Liveability Index Report) in May 2019.

In the survey, six out of ten Canadians chose Mississauga to ease access to life services, including shopping areas, dining, and green spaces.

Based on the pros and cons, here is a further bite-down analysis of the features of Mississauga. 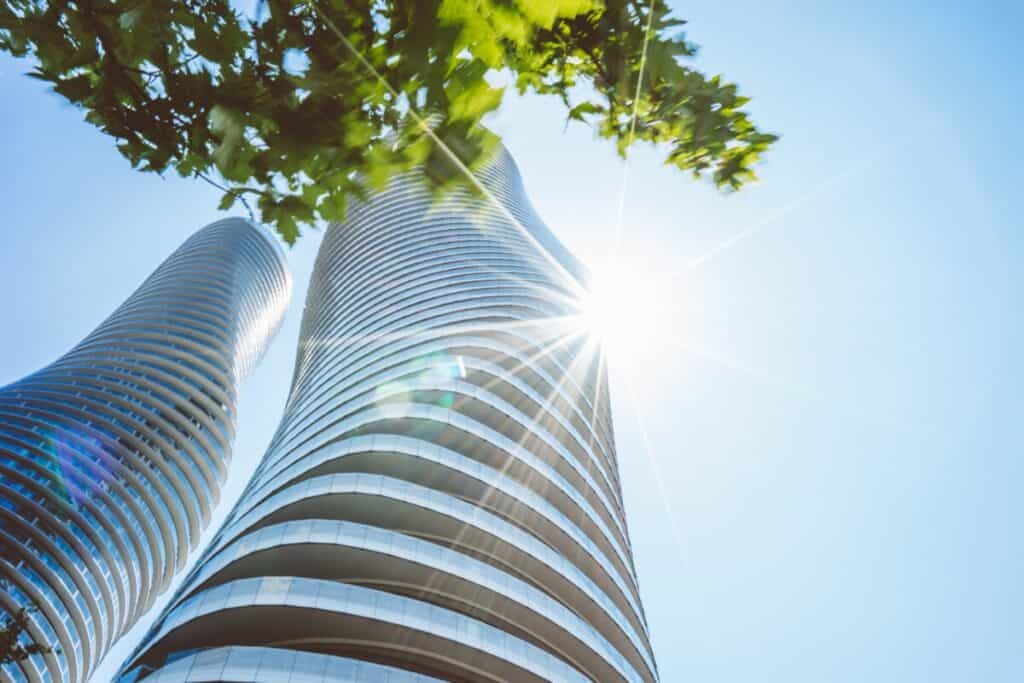 Here are some of the features the city has to offer to its dwellers:

Because of Lake Ontario, next to the city, it experiences a mild to moderate climate throughout the year. The city has a lower snowfall rate than the rest of the country during winters.

However, some people might not find the weather too comfortable. Due to the freshwater body, there are foggy spring and autumn mornings. These fogy conditions have led to vehicular accidents in the past.

MiWay is the municipal transportation agency that controls both the local and express travel buses (MiLocal and MiExpress).

The express buses cover the distances between major destinations, including connecting Mississauga with the nearby Brampton, Oakville, Toronto, etc.

The fares are reasonable and budget-friendly. There is a section of local buses that caters to the schools alone. Although the transit service spans over 90 routes, it does not reach all corners of the city. Thus, many locals prefer going around by car.

With the boom in carr pool services, including Uber, many people prefer to use these apps than owning a vehicle for cost-effectivity. However, you have to take care of the rush hours and plan accordingly.

Mississauga, together with the province’ss capital Toronto, forms the Greater Toronto Area (GTA). The cities balance each other perfectly: Toronto has a much vibrant nightlife, whereas Mississauga gives off a charming, nostalgic vibe.

You can go to Downtown Toronto in your car smoothly, provided you avoid the rush hours. You can take the MiExpress to Toronto as well.

Mississauga’s proximity is the famous Toronto Pearson International Airport, the largest in the country.

You can narrow down a neighborhood based on your needs and requirements. Mississauga offers a wide range of areas where people from all walks of life can find a space for themselves, but most of them fall on the higher spectrum. Following are some of the broader categories:

Since the Greater Toronto Area (GTA) has one of Canada’s largest business centers, young professionals and single people might want to look at Square One to settle down.

Square One is the heart of Mississauga since it houses the most incredible nightlife for singles to meet new people, affordable living, a safer environment, low cost of living, and a community of already settled professionals.

The name Square One of the neighborhoods comes from the mall of the same name. Square One is the largest mall in Mississauga.

Some of the top-picked family-friendly neighborhoods in the city include Lorne Park, Mineola, Meadowvale.

Lorne Park has a range of beautiful houses, quiet streets, and open spaces that can attract elites. It is one of the expensive areas, and if you are trying to watch your wallet, this might not be the first choice to settle down a family.

Mineola is a neighborhood that prides itself on towering trees and lush greenery. The community has two parts: East and West.

East Mineola is a popular choice, yet it has lost its scenic plus point over the years. The western part is more private and exclusive yet houses a magnificent panoramic view. The community is generally wealthier.

Meadowvale is a suburban housing community that was built in the 1970s. It is a planned community, so there are several green belts, parks, and natural beauty.

This region is diverse in inhabitants, and the houses are of affordable rates. It is no surprise that many families prefer to settle in Meadowvale with quality schools, cheap homes and condos, and local amenities at an arm’s length.

Some other affordable and safe neighborhoods include City Center/Downtown, Credit Valley, Erin Meadows, Castlebridge, and Streetsville.

Some communities are more than two centuries old and have rich historical significance. Almost all Mississauga neighborhoods are safe and provide lifestyle amenities and an inviting atmosphere.

According to various city surveys, more than half of Mississauga’s population is a mixture of different minorities.

The city has the most diverse people in the country, according to the recent census. The largest groups include Indian, Chinese, Irish, Scottish, and Italian ethnic groups.

The city even has dedicated a festival around its multiculturalism that occurs annually in May, known as Carassauga.

The festival is about the diversity of foods, music, clothing, and general ethos advocated by each ethnicity’s backgrounds.

Since the city is richly involved in diverse communities, so is its food. The eateries around town comprise of cuisines from all over the world. Places such as Streetsville, Hurontario, and Port Credit are the hub for ethnic restaurants.

Square Mall contains a Food District as well, and many tourists and locals can be found swarming the plethora of fast-food joints and ethnic restaurants there.

Possibly the most excellent question that one can ask when moving to a large city is its job market. The cost of living in Mississauga may be moderate to high, but the city has one of the country’s hottest job markets.

From 2016 to 2018, the city faced a business boom, attracting people from nearby places. The average salary is $57,000, and the most popular job is Project Manager.

There is a low cost for start-up projects compared to Toronto, and with its business development programs, Mississauga is a magnet for budding entrepreneurs.

Other than that, you will have to account for the provincial taxes, 13% property tax in case of ownership of a house or land, based on location and size.

There are some great schools in the city; some of them offer classes in French-language. The city does not have a university of its own, but there is a satellite campus of the University of Toronto.

The popular satellite campus community colleges include Sheridan and Lampton.

Various sports clubs conduct sports league matches routinely in the city, but there is no major league sports team.

The local league teams include hockey teams, basketball teams, and more. The most prominent sports club is the Mississauga Sports and Social Club.

Other than the multiculturism festival, the city revels in cultural amenities that include an art gallery: Art Gallery of Mississauga, the Mississauga Symphony Orchestra, and the Living Arts Centre.

Mississauga is a place for those who want to have a laid-back lifestyle, with a city life hustle spruce. The city is peaceful, serene, and contains various options to choose from when it comes to neighborhoods.

Mississauga is a great choice, but it, too, has its dark sides. Some neighborhoods are not family-friendly, taxes on houses may seem higher, and the city life is a busy one.

I suggest you do your research and visit the city before deciding to move to Mississauga.