Every year more and more people move to Canada and in 2018 Canada accepted its highest number of permanent residency applications. As an increasing number of people search for a better life or fresh challenges, Canada tops their lists due to the many advantages and beautiful nature that the country has to offer.

If you are thinking of moving, then you are in the right place. In this article we will explore more about the province of New Brunswick, the pros and cons of living there, the best places to live in New Brunswick and other helpful information to assist you in making the right choice for your move.

Positives of living in New Brunswick are:

Negatives of Living in New Brunswick are:

To start let’s take a detailed look at each pros and cons of living in New Brunswick.

Pros of living in New Brunswick

Compared to a lot of the other Canadian provinces, New Brunswick has a relatively low cost of housing. First of all, housing prices for renting or for buying are affordable, in fact, they are said to be the most affordable than in any other province. Of course, it will depend on where you choose to live in the province but if you live outside one of the cities you can expect to find a one-bedroom apartment, for example, at less than $500.

Buying a house in one of the more rural areas can be extremely cheap and you can pay as little as $40,000 for a smaller house. Even close to a city, or in one of the cities, the house prices are still not outrageous. To give some perspective, as of 2019 the average house price for Canada is $488,600 and the average house price for New Brunswick for the same year is $175,976. This is a remarkable difference, especially when you consider that the next lowest average is Newfoundland and Labrador, however, their average is still $50,000 more than New Brunswick.

Like with other provinces on the east coast, New Brunswick is known to have very friendly residents. Currently, there are less than 800,000 people living in the whole province which gives the residents the ability to create a close community, one that is known for helping and welcoming anyone and everyone. One of the most daunting parts about moving to a new place is not knowing anyone there, it can be hard to make friends or become part of your new local community, but the residents of New Brunswick make the whole process so much easier.

If you enjoy being in the great outdoors and among nature, then New Brunswick is a great place to be. It is estimated that around eighty perfect of the province is made up of forest, that makes for some beautiful camping spots, plenty of hiking trails, and landscape after landscape that takes your breath away. Not to mention the animals that live in the surrounding areas, if you head outside you can be sure to catch a glimpse of moose, deer, black bears, or even a Canadian lynx. You will never grow tired of seeing some of the best things that nature has to show. 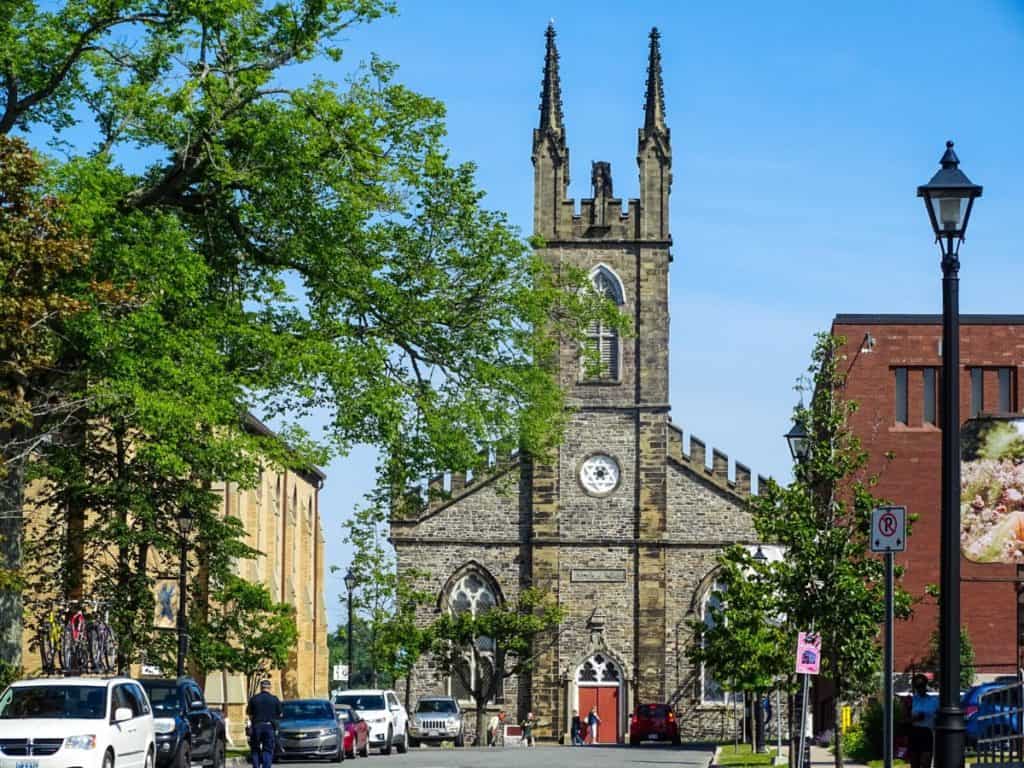 In contracts with other provinces like Ontario, New Brunswick has a list of Affordable cities such as Saint John, Fredericton, Dieppe, and many others.

The city of Moncton will frequently come up as a place that people recommend moving to, and on the face of it, it does seem like a good place to live. Despite being a city it does have low-cost housing and a low crime rate. It doesn’t have much of a night-life scene, however, there are lots of family entertainment spots around such as the amusement park and zoo. Plus, due to its location, you can easily drive for day trips to other parts of the province, or head over to Nova Scotia or Prince Edward Island. Moncton also has good public transport and very little traffic making your commute to work as stress-free as possible, and as a bonus for traveling, the main airport for New Brunswick is located in Moncton.

Miramichi is also an excellent choice like with Moncton it has a low cost of living and very friendly people. It is one of the larger cities of the province, but it is also not far from bigger cities or areas of interest such as beaches and hiking trails. The city offers people various activities throughout the year depending on the weather ranging from watersports in the summer to skating and biking in the winter. Miramichi is proud of their unique culture and even hold festivals throughout the year to celebrate different parts of it. Miramichi is a fun and easy-going place to live in a remarkably beautiful part of New Brunswick.

Cons of living in New Brunswick

Unemployment is relatively high, this is not to say that you cannot find a job, but you might face a little bit of a struggle beforehand. At the moment, the unemployment rate is sitting at 8.7% but with a national average of 5.5%, this rate of New Brunswick is far higher than in other parts of the country.

Some of the biggest factors for the high rate are that firstly, two of the main industries of the province are fishing and agriculture, but, of course, these are specialized jobs, for the most part, you cannot get a job in these field without having at least a little experience before, the experience that the majority of people most likely do not have. Secondly, many jobs in New Brunswick are seasonal, during the summer you can find a job quite easily working for any part of the tourist industry, perhaps in a cafe or hotel, but when the tourists disappear come winter, unfortunately, so do the jobs.

New Brunswick is one of the few provinces that recognizes French as one of their official languages, with around a third of the population speaking French more often than English. While the province also has English as the other official language, it is still important to try and learn French if you are thinking of moving there, or least starting to learn after you have arrived.

You can get by in English, you will see English as much as you do French, but you will have a better chance of getting a good job, and a better sense of feeling like you understand the communities better if you can speak and understand both languages.

As to be expected across most of Canada, the weather can get to be extremely cold, with the average temperature during winter barely staying above zero with the odd snow shower here and there. However, unlike more northern parts of Canada, on the whole, New Brunswick has much better summers, especially if you are living inland.

The average temperature in the summer in New Brunswick is the high twenties, for the whole summer, so when those months come, you will feel like it is a real summer. If you live anywhere along the coast, of course, it will be a little cooler from the cold Atlantic winds, but you will still have plenty of sun and warmth.

What is the best place to live in New Brunswick?

The answer to this question will depend largely on your personal preferences or circumstances. Are you moving alone? Are you coming as a family? Do you need to find a job? Do you prefer to be in a city? There are so many questions that it is impossible to give a definitive answer. However, one of the best things about New Brunswick is that overall, every town and city in the province is full of its own advantages and special qualities, and regardless of where you choose you will never be far from the beauty of a beach, woodland, or another city.

If you are looking at moving to a city, check out the page below that goes into more detail about the top ten cities in New Brunswick to help you weigh up your options.

Why should I move to New Brunswick?

There is no doubt that New Brunswick is one of the most beautiful places in Canada, and driving to work with very little traffic watching the green landscape pass by definitely makes each morning a little easier. The residents will help you fit right in and you can easily build up some great friendships after moving there.

Housing and food costs being cheaper than many other parts of the country, even in the cities of New Brunswick, make life a lot more conformable. The endless amounts of landscapes to explore and beaches to visit as well as being a reasonable driving distance from other provinces or towns mean you will always have new things to see and do.

On top of this, the laid back easygoing life that is important to the people who live here, mean that you don’t ever feel like you are living each day at a hundred miles per hour with the weight of your world on your shoulders.

There are so many great things about New Brunswick and the people who live there, but it is also important to consider any of the cons that could have an impact if you live there, however, after experiencing the wonderful lifestyle of New Brunswick where a good work-life balance is in place, you will find it hard to ever leave.