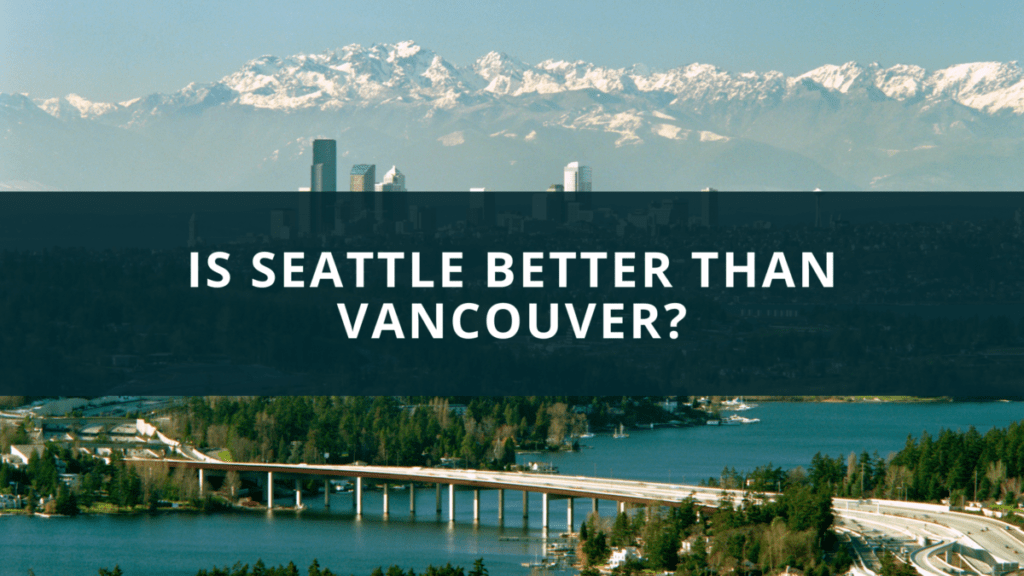 Two cities bordered by the Pacific ocean and the cascade mountains -Seattle and Vancouver, both port cities and present-day technological hubs, many would argue that they are a lot more alike than different, both cities are separated by the border that has Canada to its north and the USA to its south.

Many people ask themselves when they are looking for the perfect place to live: Is Seattle better than Vancouver? The answer depends on what you personally want out of life. Both cities are absolutely lovely and offer plenty of perks but if you prefer culture over commercialism then go with Vancouver; However, if you like your big names and shopping centres then stick with Seattle!

Many reasons could influence the opinion that one city is better than the other and it is usually relative. If you want to move with your family and would rather prioritize safety, then you might consider the crime rate in both cities or if you are looking to get employment in the technology industry, Seattle would be a preference.

The reasons for choosing to settle down in either city would differ from person to person, so if you’re looking to move to either city, here is a summarized description to help you decide if Seattle is better than Vancouver.

Although separated by a border, Vancouver and Seattle have similarities that add to their individual appeal, and are an overall consideration when choosing to live in either city.

Both cities are located in the Pacific Northwest region (also known as Cascadia) and are largely bordered by the pacific ocean and the cascade mountains, the North Shore mountains provide a beautiful, dramatic backdrop to Vancouver’s skyline and Seattle is bounded by water bodies -Puget sounds to its west and Lake Washington to its east.

They both have four seasons and are popular for their cool, temperate ocean climates, a weather that never gets too hot in the summer nor too cold in the winter but it sure does rain a lot.

Seattle is the bigger city though, it is larger than Vancouver, with a metro population of 4 million to Vancouver’s 2.5 million.

Both cities are low pollution, environmentally friendly seaport cities that have both pledged to be carbon neutral by 2050, Seattle has gotten increasingly diverse in the last decade, however, Vancouver is more densely populated and also more ethnically diverse with about 40% of its population being immigrants and in more recent times it has been referred to as the most asian city outside of asia with 28% of its overall population being Asian.

The overall cultural difference between both cities largely boils down to the identity of individual country regardless of their proximity, Seattle is a major american city and hosts the emerald city comic con, has a wide variety of popular big brand shopping stores and fast food restaurants, although Vancouver has hosted the Olympic games, Seattle is more of a sport city with its popular teams -the Seattle Mariners in the Major Baseball League and the Seattle Seahawks in the National Football League.

Seattle has its famous space needle, an observational tower, and a major view in the city’s skyline while Vancouver has its lookout tower and is more popular as a city of tourist attraction with its beaches, ski resorts, and public spaces.

The average age in Seattle is 35 years and it is younger than the average age in Vancouver which is 39 years, both cities are largely made up of a working-class community although Seattle embraces its shipping and fishing industries more than its Canadian counterpart which has a growing population of immigrants becoming integral members of its communities every year.

Although both cities are to a large extent not religious, Seattle however has a more religious population with Christianity being the most popular religion in the city while almost half of Vancouver’s population has no religion at all.

The cost of living in either city is more expensive than most other cities around the world, but living in Vancouver is especially expensive because of just how much it’s housing costs, Vancouver is listed among the top five cities with the most expensive housing units.

However, if you aren’t looking to purchase a house or live in the city for an extended period of time, the cost of living is higher in Seattle taking into account everyday living and regular expenses including food and transport, although a lot of this difference boils down to the worth of the Canadian dollar to the American dollar.

Crime rates in both cities are low but the crime rate in Vancouver is lower than in Seattle, maybe due to its lesser population.

In more recent years, both port cities have also become hubs for a lot of big brand technology companies, brands like Microsoft, Amazon, Boeing, and even Starbucks have a big presence in Seattle while Vancouver is home to brands like MDA, Telus, PMC-Sierra, EA and HBC sports and a lot of film companies -this has earned it the nickname “hollywood north” as most American filming companies that shoot in Vancouver get a huge tax break for filming in Canada.

Aside from the technology industry taking a big chunk of its commercial climate, Seattle’s other major industries include educational, health, and manufacturing services while Vancouver’s major industries aside its technology sector involve a lot of retail and professional services.

According to Forbes, Seattle is the best state in the United States for business.

Seattle’s unemployment rate is 3.6% and it is slightly lower than in Vancouvers’ which is 4.4%. Seattle has a higher minimum wage of $16 per hour which is higher than Vancouver’s minimum wage -$13.5 and citizens of Seattle pay less in taxes.

Although Seattle has worse traffic, its transportation system is focused on an extensive highway system which delivers motor vehicles to hubs within the city’s downtown area while Vancouver’s transportation system doesn’t have a highway system as good as its American counterpart focuses more on its public transit system. Transportation in Seattle is a little more expensive as its highways transport commuters across its waterline, Vancouver has about 25km of just sea wall and public space and relies majorly on its public transit for in-city movement.

Seattle is more expensive than Vancouver?

Yes. Seattle is more expensive than Vancouver because, in Seattle, commuters have to pay for their transportation. In Vancouver on the other hand, public transit is a free service that people use to get around the city. Is it better living in Seattle or Vancouver?

Both cities are absolutely lovely and offer plenty of perks but if you prefer culture over commercialism then go with Vancouver; However, if you like your big names and shopping centres then stick with Seattle!

In conclusion, both cities are great places to live due to how close they are geographically as well as culturally speaking. Living in either one will be an enjoyable experience!

Is Seattle warmer than Vancouver?

Yes. Seattle averages 2-4 degrees warmer than Vancouver, and it’s not uncommon for the temperature to quickly warm up to 10 degrees in a given month!

The reason for this is that Vancouver has no large bodies of water to keep its temperatures moderate (except for Lake BC) and also does not have any geographic locations far enough north to get as much cold air from mountains.

The cold winters that Vancouver sees are mainly caused by conditions with the North Pacific. So it’s easy to see why people in Seattle who live closer geographically the mountains will find themselves with plenty more snow days each year on average vs. those living further south and closer to Canada’s Pacific coastline like they do in Vancouver.

In conclusion, many describe Vancouver as Canada’s Seattle and Seattle as America’s Vancouver, most cultural differences are just differences between Canada and America emphasized. You might prefer Vancouver’s more immigrant inclusive community or Seattle’s larger commercial climate might be more attractive.

Regardless of the slight differences that inform your decision, both cities are absolutely lovely to live in.

link to How Much does it Cost to Rent a Boat in Toronto?

Boating is a fun pastime, but not a lot of people own their own boats. They can be expensive to buy and maintain, so renting a boat is a good short-term option. The cost to rent a boat in Toronto...

Continue Reading
link to How Much Does it Cost to Rent a Boat in Vancouver?

Who doesn’t love a day out on the water? Renting a boat can be such a fun and relaxing way to spend the day. Vancouver, British Columbia is a beautiful city located on the west coast of Canada. It...