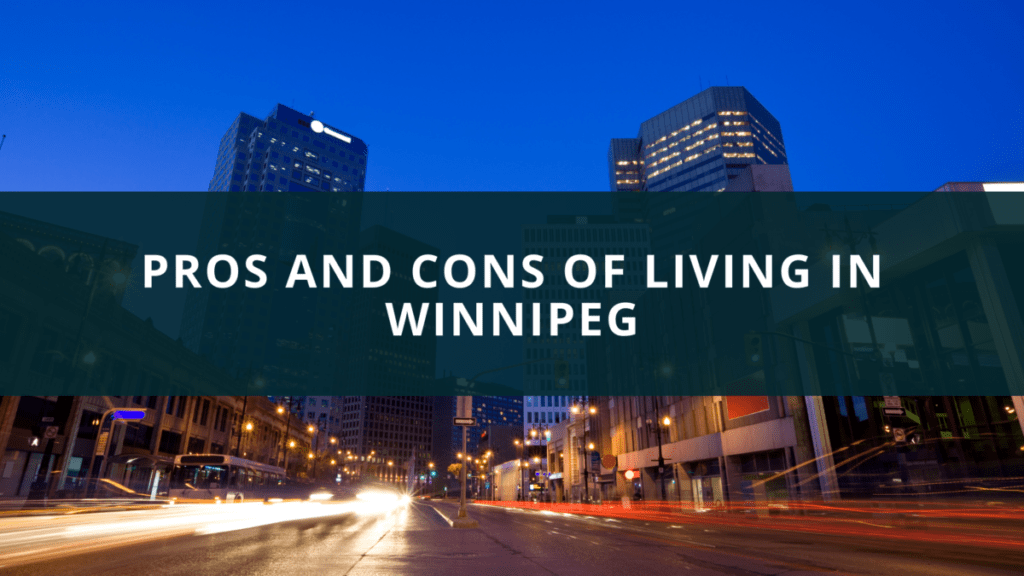 Despite its unsavory history, Winnipeg is a pretty good city to live in. From the low-cost housing with multiple options to the cold winters that bring the community together, diverse culture, and sports scenes, there are numerous opportunities for residents of the prairie city. Here are some pros and cons to deliberate on if you’re thinking about moving to Winnipeg.

The size of the city (464.1 KM sq.) and its population (749, 534 according to a 2017 census) means that there are abundant employment opportunities in the city. Significant areas of high employment opportunities here include the healthcare and construction industries. In addition, the city also has a rapidly; developing IT industry, supported by a competent public city administration and manufacturing hubs.

The real estate industry in Winnipeg is solid and stable. Housing is abundant, well-planned, and well-priced, with a regular property worth an average of $275,000 (way below the national average). Rental vacancies in the city are also stable (around 2.8%). At the same time, Bachelor pads are the most sought type of rental option primarily because of their low prices. Winnipeg is, however, filled with one-bedroom properties for rentals.

Winnipeg is a city where one can enjoy the comforts of a big city on a budget. A thriving economy, abundant job opportunities, and low rental and real estate prices are the factors that come together to make Winnipeg one of the most affordable cities in the world.

Winnipeg is a melting pot of diverse cultures across Canada and other parts of the world. Cultural diversity is one of the hallmarks of a truly global city. This diversity is why Winnipeg is called the cultural capital of Manitoba. Canadian heritage also declared the city as Canada’s cultural capital in 2010 to recognize its unique status as a culturally diverse society.

Aside from being a cultural melting pot, Winnipeg is also famous for its love of Arts. The city hosts the oldest public art gallery in Western Canada and the oldest ballet company in Canada, the Royal Winnipeg Ballet. The city also concentrates on photographic and digital arts in numerous cultural centres run by various artists across the city. Winnipeg is also dotted with thematic museums aimed at specific audiences (adults and children).

6. The city has a very vibrant sports culture

Winnipeg offers numerous tourist spots and attractions such as the Assiniboine Park Zoo with an iconic and unique polar bear exhibit. The Park Zoo allows visitors to walk beneath the sea via an underwater tunnel with the breathtaking opportunity of seeing sea creatures swimming above. Winnipeg also boasts of the Canadian Museum for Human Rights with special features for outlining major turning points in human history and landmarks of our evolutionary and technological progress through time.

8. Winnipeg has a natural appeal

The city’s natural landscape describes how it got its name ‘Winnipeg,’ which means murky waters. The city is naturally split in two between the Assiniboine and Red Rivers. With the advent of every natural season in this city comes an opportunity for different people to get in touch with nature. There are hiking trails along the rivers that are perfect for a morning run or walk. The freezing winter also provides an opportunity for some good skating across the ice rinks in the forks and the frozen river trails. Summer brings on out the natural beauty of the prairie that Winnipeg is situated in, with a vast canopy of trees and fields of green for miles and miles around.

Winnipeg can boast of a very effective and efficient healthcare system. According to a ranking by Moneysense magazine, Winnipeg performed well in the area of public health primarily due to the ease with which residents gained access to primary healthcare and emergency services.

The University of Winnipeg has one of the lowest tuition rates for universities in Canada. Alongside the University of Manitoba, Winnipeg University and the Red River College offer quality, world-class programs in different fields made quite affordable for prospective students.

Winnipeg has a lot more to offer than what this article can cover. Still, if you’re seriously considering a move to Winnipeg, you should also consider these Cons.

Although residents now feel safer in their communities due to a drop in violent crime, Winnipeg is still considered one of the most crime-infested cities in Canada. In addition, residents have complained of a growing meth problem and property theft as the moon’s dark side in Winnipeg.

You should consider moving with your private transport to Winnipeg because the city’s public transport infrastructure has been in a state of neglect for several years. The main routes have good coverage, but the newly developed areas have very little or no bus routes.

Winnipeg can be a city of extremes where the weather is concerned. Winter can be very severe in the city, with temperatures dropping below 0 degrees in extreme cases. Moving to the city entails investing more in winter gear, with insulated boots being at the top of the table. You must also get winter tires for your vehicle. On the flip side, temperatures can soar during the peak of summer, which is why Winnipeg is regarded as one of the sunniest cities in Canada. Unfortunately, mosquitos can also be prevalent during this period.

4. Slow Response to Crime and Criminality

Residents have often accused the city’s police officers and other public officials of being inefficient in tackling crime in the city. The city’s public officials are also charged with refusing to rein in insurance scams. At the same time, police often fail to respond to property theft cases or attempt to help recover the same.

Is New Winnipeg a good place to live?

Winnipeg, Manitoba is a city with many pros and cons. On one hand, it’s an affordable place to live. It also has a temperate climate that offers four seasons of the year. The downside is that it does get cold in the winter months, so you have to prepare for your travels accordingly.

link to Pros and Cons of Living in Brantford, Ontario

Did you know that Brantford, ON is known as the Telephone City of Canada? This is because it was home to the inventor, Alexander Graham Bell when he invented the telephone? To this day the city pays...

Continue Reading
link to What are the bad areas in Hamilton?

When it comes to one of the commendable countries to live in, Canada is one option that many travelers would reckon with, and the reason is that it offers a blend of aesthetics and the apt aura for...