The beautiful province of Ontario is one of the few left in Canada that requires two license plates on each vehicle, one in the front and one in the rear. There are a few exceptions to this, such as motorcycles, which are only required to have one plate, but for the most part, drivers need two. For many Canadians, this seems like an unusual and unnecessary practice, particularly since the annual renewal of plates takes the form of a sticker that is only placed on the rear plate.

New Brunswick made the switch to single plates in 2019, leaving only Ontario, British Columbia, and Manitoba as provinces that require two.

So why does the Ontarian government stick with a program that other provinces are doing away with? The answer is more complicated than it would seem and, unfortunately, there is no easy solution in the discussion.

The continuation of Ontario’s two-plate vehicle identification system has been a major topic of controversy in 2019, when the Government Services Ministry of Ontario publicly announced that they were considering ending the requirement for two plates. On one hand, the government and manufacturers could save a substantial amount of money by eliminating the front plates, as could automotive manufacturers. On the other hand, the police departments feel that the front plate plays a vital role in the safety of Ontario citizens. 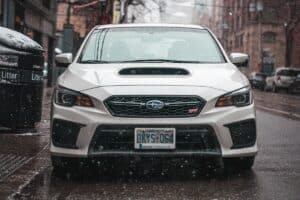 Dual license plates were once commonplace in all of Canada, but the number of provinces with this requirement is steadily decreasing.

The automotive industry, the government, and the general public could all profit if Ontario were to follow their lead.

One automotive industry issue is that the front plates occupy much-needed space on the front of a vehicle. Air inlets, radar, sensors, and other technologies are already vying for space. Should all manufacturers plan every vehicle to incorporate the front plate requirements of only three provinces?

Or should they design with the majority in mind, knowing that some of the design functionality, such as aerodynamics and even sensors, may eventually be impeded by an added plate? It is an ongoing design struggle.

The automotive industry has another reason for wanting to see the front plates exit the scene. For starters, vehicles are not designed with a specific province in mind.

This seriously complicates the production of the front ends of vehicles, because some need ‘plate pockets’ and others do not.

This creates unnecessary waste and additional part inventory. Alternatively, plates have to be installed after-market, which adds cost to dealers and buyers alike.

Not for the People

This design difficulty creates a second issue: damage from bumper-to-bumper collisions. Bumpers should absorb small impacts, that is the entire purpose of them.

However, when a front plate is installed on a bumper that does not have a built-in plate pocket, it can cause significant damage to other vehicles in the event of a small incident.

Abrasions, cracked bumpers, and paint damage frequently occurs during minor collisions because of the brackets, frames, and bolts used to install a front plate after production is complete.

For many people, particularly in bustling cities, this situation is very frustrating.

Another sticking point is that the front plate’s interruption to aerodynamics is not very eco-friendly.

Ontario places a great deal of value in protecting the environment sustainably, and the Ministry of Transportation actually has special Green Vehicle license plates with certain privileges for vehicles that use alternative energy sources.

However, adding a front plate can actually lower the fuel efficiency of a vehicle, which translates to an increase in harmful emissions.

Eliminating the extra plate could have a positive environmental impact. Furthermore, conserving the metals used to manufacture the plates themselves would mean using fewer nonrenewable resources.

The premiere’s office cited financial reasons when they announced the consideration of a change. The administration of dual license plates is a significant cost to the government.

When Saskatchewan dropped their two plate requirement, they reported a savings of well over $350,000 annually and also saw savings in insurance costs.

One petition started by Ontarians states, “…eliminating the need for a front license plate will significantly reduce the Province’s costs associated with production, storage, and accounting for the additional plate.”

While it may not seem like a major area of concern, some drivers just don’t like the look of the front plate, especially on high-end vehicles.

Aesthetics is an area of importance when it comes to vehicles, and tin plates just aren’t very appealing. Automotive dealership manager Scott Killen said, “I’ve seen some of the prettiest fronts ends on vehicles in the world be ruined by a disproportionately-sized rectangular bracket and license plate.”

While they considered the needs of the budget and the large manufacturers, they ultimately decided to stick with their current system because of its impact on law enforcement.

The commonly held belief of the Ontarian police chiefs is that the front plates increase the likelihood of identifying those involved in criminal activity. Security cameras on residences, businesses, and dashboard cameras often give officers leads in a variety of situations.

Similarly, red-light cameras can be used to enforce traffic regulations and cut down on reckless driving. Reducing the number of plates reduces the ability to collect that information.

Many police cruisers in Ontario are fitted with automated license-plate readers, a system that recognizes license plates and compares them to a database of plate information.

These can scan as many as 10,000 plates in an eight-hour shift. It would certainly seem counterproductive to have that fantastic technology, which actively runs plates to identify wanted vehicles and suspended drivers, and then take away fifty percent of the targets.

Another major area of concern is Amber Alerts. Executive Director of the Ontario Association of Chiefs of Police (OACP), Jeff McGuire, points out that every minute counts when it comes to a situation where a child is in danger, and that there is almost always a license plate number involved.

If the second plate is no longer required, that decreases the opportunity to intervene, as the public will be less likely to correctly identify the vehicle in question.

The organization insists that the benefits of having front plates far outweigh the cons. Scott Anderson, a designer for Ford Motor Company, doesn’t support front plates but acknowledged this dilemma by saying, “In our society, regulations die hard.

Nobody wants to be the guy that took legislation away if something bad happens.”

Many tolls and parking systems use cameras to identify and bill travelers. This reduces the need for staffing, as it becomes very automated. Some tollways, like Ontario’s 407 ETR, use mainly rear plate cameras.

However, some areas use front plates, as they tend to be easier to capture on camera.

Continuing the use of front plates on vehicles allows for the growth of government revenue should they choose to add more automated pay areas.

Industrial designer Miles Hammond considers Ontario’s two-plate system to be archaic. As vehicles continue to be upgraded and more technology-dependent, there is a possibility that cars will switch to a more advanced system of identification that would nullify the need to have both plates.

Radiofrequency identification (RFID), for example, might be the next step.

An RFID system would use electromagnetic communication to identify the vehicle because each would be given a unique RFID code.

Some car rental companies and other businesses already use this system to track vehicle data, while some states use it to track travel data and tolls. Is this the future of vehicle identification? It seems to be a likely prospect.

In the end, it’s a difficult decision. The front plates create an unnecessary hassle for the automotive industry, by taking up valuable front-end real estate that is necessary for the new technologies incorporated in vehicles and making design and production more complicated than ever.

Front plates also have a negative effect on the environment, because they reduce the carefully crafted aerodynamics of the vehicle.

Finally, they can be a source of frustration for vehicle owners, who may experience damages due to the front plate hardware.

On the other hand, the police view the loss of the front plate as a major loss of resources for crime-solving.

The front plates provide valuable information to officers via security cameras, automated license plate readers, and witnesses, information that may not be obtained if there is only a rear plate available.

Technology may change things in the future, but Ontario is sticking with dual plates for now. In the grand scheme of things, the province values the safety and well-being of its citizens more than minor inconveniences and saving money.