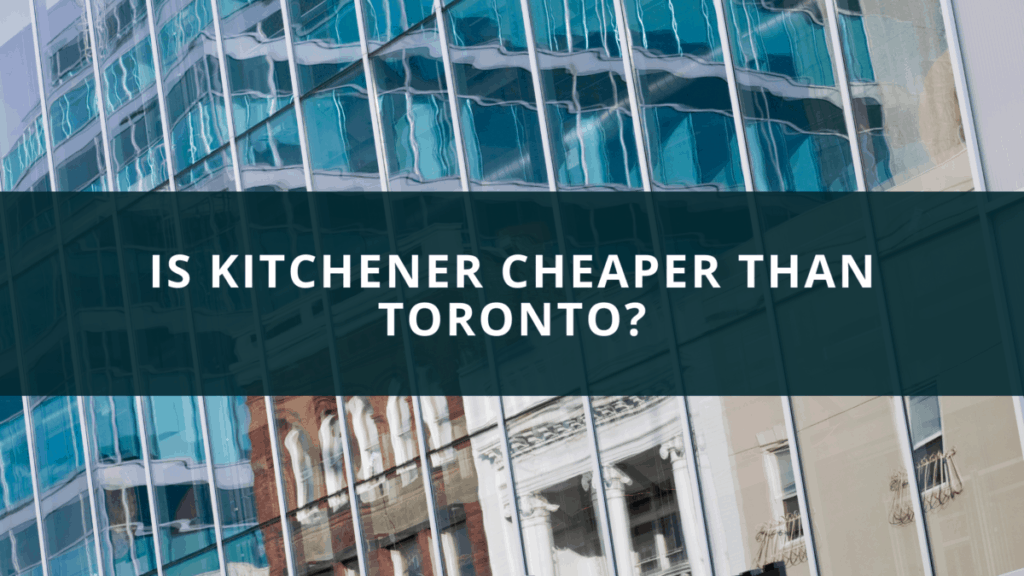 Many Canadians are discovering that Kitchener has some of the best living conditions, making it a good place to relocate to. With its GO transit train, busy commuters can easily access different parts of Kitchener, especially those going on weekend trips.

It can be cheaper to live in Kitchener than Toronto, but it really depends on what you’re looking for. The cost of living is generally lower in Kitchener and the population density is much higher. Housing costs are also generally less expensive when compared to Toronto.

Is this move in your best financial interest? The information below will highlight the living costs of Kitchener versus Toronto and the advantages and disadvantages of living in Kitchener. This would help you make an informed, unbiased decision.

How much does it cost to live in Kitchener?

A cost of living in Kitchener-Waterloo is 26% cheaper than what it would be like to live in Toronto.

The monthly cost of living for a family of four in Kitchener-Waterloo is $4,431. This price would be $6,143 if this family of four were to live in Toronto.

For a single person living in Kitchener, the estimated monthly costs would be $2,236 and for Toronto would be $3,551.

However, this doesn’t take into account any other factors because some people may not mind paying more money out-of-pocket every month for a better quality of life or to have access to more entertainment options.

It is easier to conceive of Kitchener as a reserved and boring place if you’re used to the lively environs of Toronto. While this sentiment holds an ounce of truth, it is not essentially something bad. There isn’t much to do and see in this part of Canada. With about two hundred and sixty thousand residents, Kitchener is smaller than Toronto. For comparison, Toronto is eight times bigger than Kitchener.

Kitchener features some really great concert halls, small and big, but not in any way similar to the characteristic nightlife of Toronto. You’d have a lot of restaurants at your beck and call. Yet, you won’t see many fun bars littered around the city like is present in Toronto.

There are beautiful natural sights in the nearby countryside that you can visit with no trouble at all. You could get on your bike or take a car and make it there within ten minutes, so if nature is what makes you happy then this city will be perfect for you!

The Hydrocut ranks 32nd on the planet and is a city’s most popular trail system. Born in Kitchener, it has been residents’ major form of transportation for decades. Chicopee offers snowboarders or skiers an alternative to Blue Mountain; although small it can save you two hours of driving time!

The St. Jacobs Farmers Market is a popular commercial center that converges people from around the province and beyond, all coming to experience Canadian farm goods for themselves! It has been recognized as one of the largest continuous farmer’s markets in Canada – hosting up to 1 million visitors each year; it opens only on Thursday mornings and Saturday afternoons every week.

Toronto is a great city for public transportation.  Public transit in Toronto is called the TTC. The TTC has a wide variety of busses that go to many places in the city.

You can get on any bus and take it where you need to be, as long as you are paying for an adult fare.

There is also public transportation by train, which will cost more but allow you to travel at your own pace through Toronto all day if needed! Subway fares range from $2.30 to $3.25 for seniors and children. However, sometimes you will need a bit of patience with often delays and disruptions.

In Kitchener, the Light Rail Transit(LRT) service can take you to most places. If you’re looking to live somewhere new or just want new scenery from your commute, there are plenty of subdivisions with good transit options as well.

The construction of this LRT caused enormous disruptions and went over budget and behind schedule. But that didn’t stop the train from being a success. In terms of walkability, Kitchener scores less, but for people who live in places where the LRT operates, they may enjoy it.

Kitchener is arguably a wealthy area, and surely on par with Mississauga, Brampton, and Toronto when household income is the topic of discussion. But in comparison to Toronto, the cost of housing here is super cheap even though the locals aren’t doing so poorly in their incomes.

Toronto is one of the safest cities in Noth America. Nevertheless, Toronto is not as safe a city in comparison to Kitchener according to statistics. Toronto has double the murders per capita than Kitchener does, and shooting violence increased sharply this year. Even so, when you compare Toronto’s crime rates against other US cities there are less serious problems for sure.

Kitchener, Ontario is a very intellectual city. In fact, it has a high literacy rate. Kitchener also offers plenty of blue-collar jobs to local residents as well as college degrees from Conestoga College and UW with satellite campuses for Laurier and McMaster located nearby.

Kitchener is a city in Canada with its own Silicon Valley, or so some experts say. With Blackberry and Google as major employers of labor to the area, Kitchener has much potential for economic growth (also home to Toyota’s manufacturing plants). Though one would argue that academia is also an important part of this economy due to the University of Waterloo’s presence.

As in other major cities, the Kitchener-Waterloo area has a variety of restaurants to choose from. It is also home to many ethnic restaurants and eateries as well for those wishing to explore new tastes without leaving town.

The cost of monthly daycare is a big expense for several families making it a legitimate source of concern. When you opt to stay in Kitchener, be sure that you’d save a minimum of $200 monthly for each of your kids. According to numbeo.com the cost of private childcare for one child in Kitchener (Preschool) is $1225 vs $1,671.83 in Toronto, a total of $5361.96 in savings a year.

It is generally risky to drive in Toronto. This sentiment comes from real people who’ve lived both in Kitchener and Toronto, and it is one that experts in the insurance sector generally agree with. By choosing to live in Kitchener, you’d save more in insurance funds than you’d do while living in Toronto.

Gasoline, electricity, heating, and groceries are just the same in price as they are in Toronto. The commissions on real estate are roughly twenty percent lower than what you’d get in Kitchener, even with the exclusion of much lower costs of homes. Also, the tax levied on land transfer is non-existent in Toronto. Selling or buying more in Kitchener is a lot cheaper in taxes and fees. Also, property taxes are greater in Kitchen than in Toronto. But in Toronto, their valuations would be higher so you would get exactly the value of what you pay for.

Toronto is the most expensive city in Canada, with an average house price of $917,000. Homes in Kitchener are also less expensive than homes on the Toronto housing market. The average cost for a home is about $550,000 in Kitchener.

Is Kitchener a good city to live?

Kitchener is a good city to live in. It has close access to many amenities and offers excellent job opportunities for those who want them. However, Kitchener does not have the same level of entertainment and nightlife as Toronto, so if you are looking for more artsy pursuits, this might not be the best place for you.

Why You Should Move to Kitchener

So, why should you take the giant step and move from Toronto to Kitchener? What about quiet and peace, affordability, closeness to nature, and room for growth? Indeed, the area’s local economy features low unemployment with several job postings and opportunities. Also, there are very good schools there.

And you wouldn’t spend all your evening trying to beat the traffic. If you have a home in Kitchener, you’d save a significant amount of cash courtesy of the cheaper lifestyle in Kitchener. These are some of the few good reasons why you should consider relocating to Kitchener from Toronto.

If, after relocating to Kitchener you become homesick for clubs, concerts, or major sports leagues, then you can always come back to Toronto. It is just an hour and a half away! Living in Kitchener, you’d really eat your cake and have it.