Yukon is a small, simple, and pristine territory. It’s known for its cold winters with several sporting activities and long summer days. This is a wonderful place to live, but not before you weigh its pros and cons.

The pros and cons of living in Yukon are almost equally balanced. The pros include an impressive outdoor environment, friendly people, and low crime rates with a great quality of life. On the flip side, it has very cold winters with short days, expensive housing, and a high cost of living.

Before you make Yukon your home, here are the lists of advantages and disadvantages of this territory. You might want to go through this to get an idea of the kind of place it is.

Pros of Living in Yukon

Yukon puts the “great” in Great White North (Canada). With its beautiful, peaceful, and expansive surroundings, this is the place for all who love nature and the outdoors.

Whether you choose to stay in the small towns or the big city of Whitehorse, there’s a breathtaking wilderness right at your doorstep.

The territory is dotted with many glacier-fed lakes, most of which flow into the Yukon River system. Another key physical feature is Mount Logan.

With the constant weather changes in Yukon, there are many outdoor activities to enjoy in winter and summer. Take, for instance, the hundreds of kilometers of trails.

You can go biking or hike your way through the wilderness during the nice warm afternoons.

If you live in this territory, you’ll never be short of wildlife to admire in Yukon’s Wildlife Preserves. And during winter you can go skiing, hunting, fishing, or even snowmobiling.

Check out this video of the best things to do in Yukon:

All citizens and permanent residents of Canada can access government-funded education up until secondary school. This means schooling for all kids is free of cost.

Yukon territory is no exception to this. Their schools follow the British Columbia curriculum for all students. And the government ensures all public schools are well funded.

Yukon has one tertiary institution, Yukon College. This is located in Whitehorse and is a member of the University of the Arctic. And in December 2019, the Yukon Legislature passed a bill that would transform Yukon College into a University. So living in this territory, though small, one can still get higher-level education. 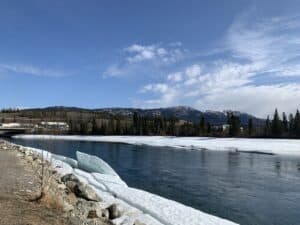 People in Yukon are friendly and very welcoming. If you are new to the area, you’ll admire the close-knit community feeling.

There are also some cultural events held all year round so you can mingle with other residents.

The people of Yukon are likely used to having foreigners in the area since the population is diverse, with only 25% being of First Nations (Indigenous) descent.

There are several ethnic and cultural groups in this small territory. And to embrace even more people, they have several volunteers eager to assist newcomers.

Living in Yukon has a unique experience one cannot get in the big, more urban provinces of Canada. There’s a sense of peace and tranquillity in this territory like no other.

The quality of life is exceptional thanks to the magnificent landscape, safe environment, and a healthy lifestyle for the people living here.

What is more, because of the small population, there’s relatively low human interference with nature; hence the level of pollution is low. In fact, the capital city, Whitehorse, appeared in the Guinness Book of World Records (2013 edition) as having the least amount of air pollution of any city in the world.

This shows you just how clean and fresh the air in this territory is. 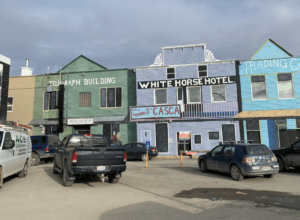 This is an advantage you are more likely to enjoy in Whitehorse, the capital city of Yukon. There are cultural sceneries all year round.

The days-long Adäka Cultural Festival is one to look out for. During summer, residents enjoy events like the Yukon River Trail Marathon and the Light mountain bike festival.

And the winter season events include the famous Yukon Quest International Sled Dog Race and the toughest ultra race in the world: Yukon Arctic Ultra.

A little out of the city, you can find entertainment spots, cultural centers, and art galleries.

Cons of Living in Yukon

As we’ve already mentioned, the number of people living in Yukon is pretty few for the land available. While this is great for availing more outdoor space and natural surroundings, it results in very little human contact.

If you are to live in the capital, where almost three-quarters of Yukon’s population is, you’ll get to meet a few people within the city. But even then, they aren’t a whole lot, and because of this, there’s a feeling of isolation one can get while living in this territory. If you’re the more social type, then this is probably not the place for you.

The cost of living in Yukon is relatively high. Rent is expensive, and there are few chances of getting affordable housing. In Whitehorse, a bachelor apartment goes for about $750 per month, while a one-bedroom apartment costs at least $950 monthly. If you rent a room in a shared house, you’ll pay approximately $500 per month.

The cost of buying a house is not any better. And the new apartments being built are even more expensive.

Another challenge is the high heating bills. Since it’s often so cold, you cannot do without a heating system, and eventually, you’ll pay a fortune because of operating it for at least six months in a year.

The high cost of living is also brought about by the expensive daily household essentials like food. Groceries and other foodstuffs can be pricey in the city and even more expensive in the smaller towns far out.

Due to its location far north, Yukon is generally a cold territory all year round. The temperatures during the winter months can get to as low as -34°C (−29°F) while cold summer days can go below 10°C (50°F).

These long and short days can take a toll on you if you aren’t quite used to it.

There you have it, the pros and cons of living in Yukon. As you can see, there are notably good things about this territory and also great challenges one can experience living there.

To be honest, this westernmost Canadian territory is not for everyone. If you are looking for lively city life, this would not be your ideal choice, but if you are a nature lover and not so big about crowds, you will probably fall in love with Yukon.

If you want to know more about this amazing province, please check out this article What are the challenges of living in Whitehorse.