You might be looking to move to the quiet countryside in British Columbia. If so, do not beat yourself with it. Vernon, British Columbia, Canada, is a perfect choice for having a life in a more natural atmosphere. Vernon prides itself on being the nexus of activities in North Okanagan.

It has a population of about 42,000. The area is situated in Okanagan Valley and is surrounded by three fresh-water lakes: Okanagan, Kalamalka, and Swan. The city gets its name after Forbes George Vernon, a former MLA of British Columbia, who helped develop Coldstream Ranch in the nearby Coldstream town.

In a survey conducted in 2005, Vernon was ranked the top six most desirable communities to relax after retirement. This fact comes as no surprise as the median age of a local is 48 years old.

If you want to know more about this beautiful valley-city and the life it has to offer, the following is a list of advantages, disadvantages, and some of this historic city’s features.

Pros and Cons of Vernon

The list of both advantages and disadvantages of living in Vernon are plenty, but here is a list of some of them, listed as follows:

Based on these pros and cons, here is a further bite-down analysis of its features of Vernon. 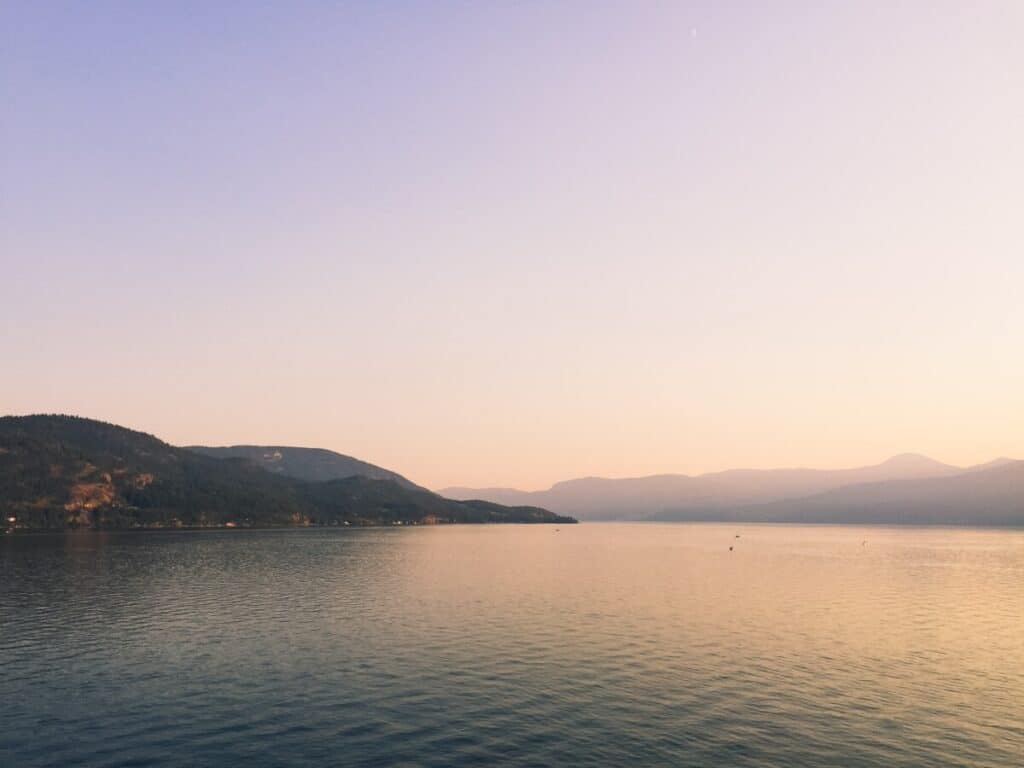 Vernon has a hot-humid climate. With summer temperatures reaching up to 28°, the days can get pretty warm. The winters are quite mellow in comparison with the rest of Canada.

The temperatures rarely dip below the freezing points during winters. Despite that, Vernon still gets 0.1 inches of snowfall for some years. The winter months usually last from November till March.

Local builders have made small communities such as Turtle Mountain and Adventure Bay that amplify spectacular scenic views by providing a luxurious living closer to the wilderness.

The transportation in the city of Vernon gets monitored by Vernon Regional Transit, which manages all local and out-of-town buses. eBUs buses also take commuters from Downtown Vernon to nearby locales.

In addition to that, there is a regional airport that is used by private aircraft. There is a Kelowna International Airport located 40 kilometers south on Highway 97.

The airport houses passenger and cargo lift to various local and international cities around the world.

Vernon has a sizeable minority population of about 6.2%, and the aboriginals make up 7.2%, while the other 86.8% are white residents.

The largest ethnic groups include South Asians, Chinese, Filipino, and Japanese. Other than English and French, which is spoken by most of the population, some city dwellers also claim that German, Punjabi, Russian, Ukrainian, and Dutch are their mother tongues.

Vernon offers a wide range of areas where you can find a nice place to settle down. There are some great neighborhoods in the Greater Vernon Region so we will focus on communities in the city and the suburbs of Vernon. Following are some of these neighborhoods and their qualities that stand out:

East Hill is an old neighborhood that was one of the city’s earliest settlements back in the day. You can see the architecture of antique designs in the 1900s homes.

This neighborhood is a walking distance of Downtown Vernon, and it contains several parks. Ravines and hills also surround the area.

Harwood is a suburban neighborhood located north of the city and contains many of its famous shopping areas. There is a race track close by and Village Green Center Mall that attracts shoppers from all over the city.

This neighborhood includes townhouses, apartments, and large houses with splendid lake views. Mission Hill’s location gives it a panoramic view of the city center, which looks fantastic at night. The are many single and multi-family homes in the community. Some of them are affordable and comfy.

South Vernon is a small sub-area of Vernon, not far from Downtown Vernon. This area is popular with small families because elementary and secondary schools are within walking distances. South Vernon has a great variety of houses: townhouses, fourplexes, duplexes, and apartments.

This area is a midrange family-friendly neighborhood with its new and old townhouses, duplexes, and single-family homes.

The local amenities include Davison Orchards, Planet Bee, Buy-Low Foods, and the Longhorn Pub are some of the local businesses that the people love to support. One advantage of this neighborhood is that the regional airport is only minutes away from Westmount.

The city region has fourteen elementary schools and five high schools. One of the most popular high school known as Vernon Secondary School (VSS) is in the suburban East Hill.

There are some independent Christian schools, which have both elementary/secondary and high school campuses. Vernon has Okanagan College, a community college that grants full degrees, summer courses, and annual courses on various study topics.

There are many other smaller and notable community and specialty colleges in the Great Vernon area.

Moving to a smaller city can dock your chances to find many excellent jobs, unlike the large cities. However, this does not mean that the city economy is on a decline.

An average worker in Vernon gets $66,658 (CA) yearly, which comes out to be $32 (CA) hourly. The city’s most popular jobs include accountant, registered nurse, human resources manager, web developer, and mechanical engineer.

Besides, there are fewer industries in the whole region, further declining new and better-paying job openings. A significant portion of the lack of employment chances is that the city has a greater percentage of retired seniors.

The sports activities go on all year round, including golfing, hiking, skating and ice hockey, etc. Because the Vancouver residents and Calgary residents often visit the city for their weekend getaways, the locals have come up with various sports and recreation activities that go all year round to attract them. Golfing is a popular pastime for both elderly tourists and residents alike.

The famous Predator Ridge Resort golf resort situated in Vernon is famous nation-wide for being ranked as the top 25 golf courses in Canada.

These skiing areas are world-famous for being the world cup hosts in 1991. Silver Star resort also happens to be the largest ski resort in North America.

The city has a celebrated junior ice hockey team known as the Vernon Vipers and a Vernon Tigers Junior B Lacrosse Club team. Both teams have won their league titles multiple times in a row. The lacrosse team even won two provincial silver medals.

Every year, Vernon hosts the Vernon Winter Carnival. It is North America’s second-largest winter carnival, and It consists of winter sports matches of games such as ice hockey, skiing, skating, and family-friendly events.

Since the region experiences all four seasons, there is a summer festival with pleasant and warm summers to celebrate it. It happens on the main street every year. There is a music festival called the Komasket Music Festival that happens every August.

The Vernon and District Performing Arts Center situated in the city focuses on arts and theatre. It gives the local talent a fair chance to prove their mantle. The center also holds some touring musical acts and community events all year round.

Other notable attractions include the Towne Cinema – a 1930s architectural marvel – the Vernon Community Arts Center on Polson Park near the Downtown Vernon, and a Creative Chaos Fair that houses legendary art pieces of various mediums.

The display of public art forms includes heritage murals, sculptures, and mosaics that pay homage to the founders of the city’s art centers, instructors, and famous personalities.

The crime in the city is non-existent. Children can safely come and go to the schools without the parents worrying about their safety says a lot about the community.

Life in Vernon, B.C, is full of opportunities to lead a peaceful life and get closer to nature. The neighborhoods are nice, friendly, and safe, despite the impossible housing costs and provincial taxes on lands and rentals.

The city does not have a bustling nightlife, but it can offer a wide variety if you enjoy outdoor activities and sports. I suggest that you do your proper research about the city, its neighborhoods, and the amenities offered before deciding to move to Vernon.