There is no doubt that Canada is a relatively good country to live in, and it is also very attractive to immigrants. However, deciding on a Canadian province and a city to settle in or move to is a different story. And if you are deciding between the cities of Vancouver and Victoria, you will have to weigh in a lot of factors because they are both good choices but in different ways.

Vancouver and Victoria each have their own charm, and living in either one presents its advantages and its challenges. So, it is difficult to see which one is better outright. Ultimately, your choice would depend on your preferences, priorities, and long-term goals.

However, to decide between these two British Columbia cities, you would need to compare their economy, cost of living, real estate prices, crime rates, healthcare, educational opportunities, among other considerations. So, read on and learn about these deciding factors.

What You Need to Know About Vancouver 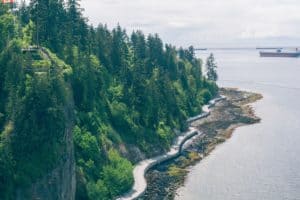 Vancouver is located on the mainland of British Columbia, on the West Coast of Canada, and 50 kilometers north of the United States border.

This coastal seaport city is one of the most livable cities in North America and was even recently ranked by international employment data provider Mercer as the third best city in the world in terms of quality of living, next to Vienna, Austria and Zurich, Switzerland.

Vancouver has a diverse population as it embraces a mix of people from different racial backgrounds, ethnicities, and cultures.

According to the United Nations population projections, the current population in Vancouver’s metro area is 2,581,000, making it the third-most populous city in Canada.

The weather changes a lot in Vancouver. The summer is typically dry and temperate, although it rarely gets uncomfortably hot. In contrast, you can expect rains during most days in late fall and winter, and the regular rains can be tough.

According to the relocation service company InterNations GO, Vancouver has a booming economy. There are plenty of job opportunities, with openings in the field of education, healthcare, technology, and finance.

This makes Vancouver’s salaries one of the most competitive in the country.

However, InterNations GO notes that for those who are not skilled workers, salaries can be low, with minimum hourly wage being CAD14 (USD10.29).

In other words, workers are not well-paid unless it is a skilled job.

Vancouver is also considered one of the more expensive cities to live in Canada.

For one, it has a very competitive and overpriced housing and real estate market, where you will have to prepare spending half of your income on rent.

Otherwise, you will have to endure hour-long commutes to and from your workplace because the cheaper rental options are on the outskirts of town.

This number is in line with Daily Hive’s computation of a minimum cost of CAD2,081.56 (USD1,529.21) per month for housing, which already includes costs for a one-bedroom apartment, basic utilities, and internet.

As for taxes, Sunset Travellers says that everything in Vancouver is taxed additionally to the prices of goods. Moreover, you will be taxed high, even on average earnings.

Vancouver’s public healthcare is subsidized by taxes, so as long as you have a permanent residency permit, you can get full access to healthcare. This covers almost all of your medical expenses.

Another attractive thing about the city is its excellent public education system. It is free, and it ranks high on an international level.

You will love how Vancouver has both beaches and North Shore mountains.

So, if you love nature, the city has lots of sights to see. It also offers a lot of activities that tourists can do.

And when it comes to shopping and dining, Vancouver doesn’t disappoint, being one of the world’s most multicultural cities. At the Metropolis at Metrotown, British Columbia’s largest shopping center, you can already find 375 stores, restaurants, spas, salons, movie theaters, and many more.

However, while Vancouver is a fairly safe city with a safety index of 63.35, its crime rate is quite high at a crime index of 36.65. Drug use on the streets and violence against women is quite common.

What You Need to Know About Victoria

Victoria is the capital of British Columbia. It is located off the country’s Pacific coast on Vancouver Island’s southern tip.

According to the United Nations population projections, Victoria has a population of 386,000.

The city has the mildest climate in the country. It has dry yet comfortably warm summers with the constant offshore breeze, less rain, and springs that arrive earlier after the winter than in most of Canada. In any given year, you get to enjoy an average of 308 rain-free days.

Victoria is called the City Gardens, and it lives true to its name. It is also very progressive, clean, and environmentally friendly.

According to the Greater Victoria Chamber of Commerce, Victoria’s economy is diverse and is driven by small and medium businesses. Its leading industry is technology, with annual revenues of more than CAD3.15 billion (USD2.31 billion).

The city is also a major tourist destination, and its tourism industry contributes CAD2 billion (USD1.47 billion) of annual revenues to the region. Other sectors like education, marine, health, retail, agriculture, and construction are rising steadily.

Given these economic generators, the city presents many job opportunities.

The cost of living in Victoria is high, and it is considered one of the top five most expensive Canadian cities to live in, together with Toronto, Vancouver, Montreal, Quebec City. According to Payscale, this cost of living is 100 percent higher than the national average. A bulk of the costs goes to housing, with a one-bedroom apartment priced at CAD1,400 (USD1,028.50) per month.

One of the benefits of living in Victoria is the access to this high-quality education system, ably run by the British Columbia provincial government. Victoria also enjoys the status of being one of the cities with a high international student population.

Victoria’s healthcare system provides high-quality prevention, treatment, and care to all residents. You can avail of free treatment in public hospitals.

Victoria is a safe, clean, and walkable city. Aside from its stunning gardens, it is also known for its heritage architecture and great shopping and dining options.

Vancouver vs. Victoria: In a Nutshell

The pace of life in Victoria is a bit calmer than that in Vancouver. Victoria also has a milder and much more pleasant climate, with twice as much sun yet half as much rain.

What’s more, the general cost of living in Victoria is significantly cheaper.

With consumer prices, rent prices, groceries, and restaurant prices higher in Vancouver, you will have higher purchasing power in Victoria.

Vancouver is a much bigger city, with a busier and more dynamic vibe and a denser downtown core. It is also less conventional and more culturally diverse.

What’s more, it has a solid, convenient, and more spread public transit system, making it easier to get around the city. But you can easily walk or bike from point to point, or from one major attraction to another.

Moreover, it has a wider selection of activities, events, and shopping and dining offerings.

Despite their differences, they are both great cities to live in. And as to which one is the better choice if you decide to move there, it is just a matter of weighing in the things you love about each of them.